In this week’s basketball coaching conversation, Larry Shyatt joins the Basketball Podcast to discuss all things coaching including best teaching concepts, transition defense, free throw practice, the NBA and NCAA, changes in the game, culture and so much more.

Defensive Thoughts and Drills for Practice

Larry Shyatt has been a highly respected and successful coach at the collegiate level for decades. Shyatt is currently on a hiatus from coaching after having spent the last few years with Rick Carlisle’s staff with the Dallas Mavericks of the NBA.

In 2015 Shyatt led the Wyoming program to just its second appearance in the NCAA Tournament since 1988, the same year also winning the Mountain West Conference tournament for the first time since 1988. Prior to his five-season stint at Wyoming, he was an assistant coach under Billy Donovan at the University of Florida from 2004-11. During that time, Florida won back-to-back national championships with a team featuring, among other players, Al Horford, Joakim Noah, and former Maverick Corey Brewer.

Hailed for his defensive mind, Shyatt built one of the country’s best defenses during the 2014-15 season at Wyoming. Led by Larry Nance Jr., now playing with the Los Angeles Lakers, the Cowboys allowed just 56.4 points per game, seventh-best in the nation that season, according to Sports-Reference.com. Nance would become Wyoming’s first player selected in the NBA Draft since Theo Ratliff in 1995. Shyatt finished with a 117-78 (.600) record with the Cowboys. Before that, he was head coach at Clemson from 1998-2003 — finishing runner-up in the NIT in 1999 — and assisted at Cleveland State, New Mexico, and Providence.

Learn more from Larry Shyatt with this blog on preparing for a head coaching position by clicking here:

Preparing for a Head Coaching Position 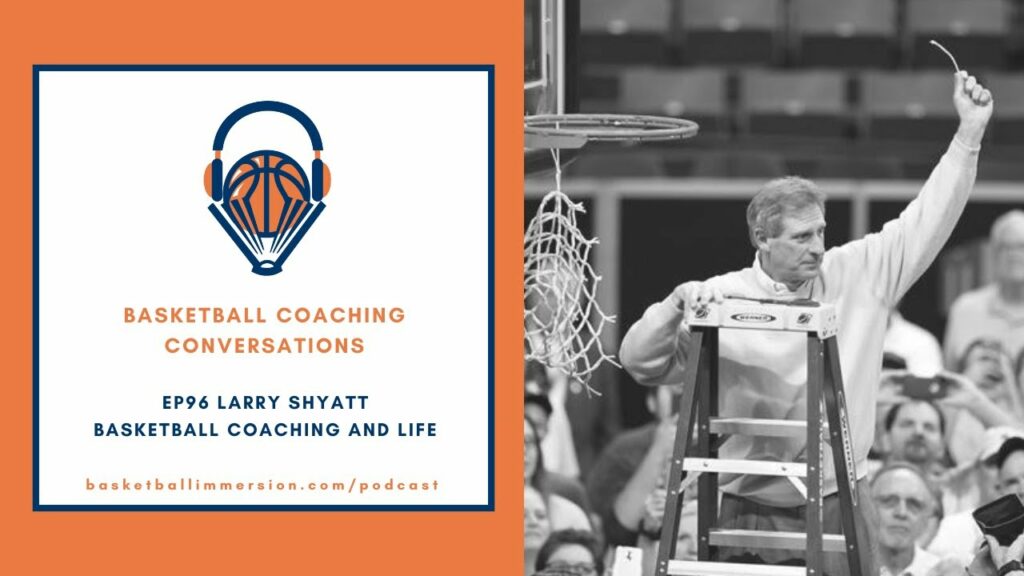 “I never thought, nor do I believe that I worked for Ric Barnes or Billy Donovan or Rick Carlisle and . those who worked for me – you work with me but we serve Clemson or we serve Florida or we serve the Mavs, all of us included.”

“Everybody says honesty’s very important. Of course, it is. But truth telling is telling the whole truth. A lot of us, we leave things out sometimes. . maybe because we don’t want to hurt somebody . . but to me that [truth telling] is the essence of us being the proper mentors and teachers and coaches.”

“I always wanted to make sure I didn’t disappoint the people I love the most – my family.”

“Everybody cannot be advantaged playing the game the same way . . all [teams] . . have different strengths and weaknesses.”

“Think about what a coach’s job is. We’re trying to bring people together . . for an us against them, for something more important than self.”

“How are you going to handle your staff? All suggestions are good suggestions, so long as you . . tell me ‘why?’ “

“Before we can talk about winning or winning a championship or being successful, we have to know what goes into losing . . [so that] when the chaos, when the adversity hits . . we can get away from that or guard ourselves from that or at least be more intelligent about it.”

“To me, you’ve got to show the players who you are both on and off the court.”

“We had one quote up in all six years at Wyoming . . because of . . who I thought we needed to emblemize and who we were . . it said, ’Hard work and intellect will defeat talent, when talent doesn’t show.’ . . You’d be shocked how many times talent doesn’t show.”

“Great teams win without their coach . . you’re not looking at your coach every single decision. You’re going to play on your instincts, on your practice and for each other.”

“I had to make sure they understood, ‘This guy actually cares about me. This guy believes in my future.’”

“If you’re a college basketball coach at any level . . your academic person, your trainer and your strength coach are the three people who will end up spending the most time with your team when their guard’s down . . that is really important.”

“I place a lot of emphasis . . on the first six and last six seconds of every possession . . trying to take away the first lay-up and three . . and trying to make sure that we get over 80% of the defensive rebounds.”

“We went to the most important part of the game . . transition D . . we always talk about hands, feet, mouth . . good teams do two of them but the great teams use their hands, their feet and their mouth . . I am not moving on from transition D until I am certain I like the smell of the gym . . it’s got to be loud, it’s got to be urgent.”

“[Free throws] were something I knew was important . . in our style of play . . it didn’t matter how much talent the opponent had, they can’t guard us there [at the free throw line].”

“One other thing about fouls and their significance . . if their good players [on the opposing team] foul, they don’t get to play as much . . you want to get the talent level a little equal? . .let’s get a couple of those guys sitting on the bench because they couldn’t or they didn’t want to guard long enough.”

The Power of Negative Thinking