In this week’s basketball coaching conversation, WNBA championship head coach Mike Thibault joins the Basketball Podcast to discuss adding the 3 point shot to your offense. Thibault is the WNBA’s all time winningest coach and a WNBA champion after winning the title in 2019.

Mike Thibault was named the head coach/general manager of the Washington Mystics on December 18, 2012. Following the 2013 season, his first season with Washington, Thibault earned his third WNBA Coach of the Year recognition. The winningest coach in WNBA history, Thibault led Washington to three consecutive postseason appearances (2013-2015) and in 2017, past the first round of the playoffs for the first time in 15 years.

Prior to joining the Mystics, Mike Thibault was the head coach of the Connecticut Sun where he was twice named WNBA Coach of the Year (2006, 2008) and led the team to eight playoff appearances and two WNBA Finals. He set numerous milestones during his time with the Sun, including becoming the second coach in WNBA history to reach 200 wins, the third-fastest coach in league history to reach 100 wins (doing so in 159 games) and the fourth WNBA head coach to work at least 300 regular season games.

From 2003 through 2008, Thibault and the Connecticut Sun won 127 regular season games, tying with the Detroit Shock for the most victories during that six-year span. The Sun were one of two teams to have six consecutive winning seasons. Connecticut posted consecutive 26-8 records in 2005 and 2006, which are still the best regular season results for an Eastern Conference team.

Mike Thibault joined the professional coaching ranks in 1978 as a scout for the Los Angeles Lakers and was quickly promoted to Director of Scouting and assistant coach in 1980. During his tenure with the Lakers, the team won two NBA Championships. From 1982-1986, he served as the Director of Player Personnel and assistant coach for the Chicago Bulls when the organization selected Michael Jordan, Charles Oakley and traded for John Paxson. Thibault was also scout for the Seattle Sonics and immediately prior to joining the Sun in 2003, he was an assistant coach with the Milwaukee Bucks for four seasons.

Thibault has had an extensive collaboration with USA Basketball. He most recently served as an assistant coach to the Women’s National Team that won gold during the 2008 Beijing Olympics. He was on the coaching staff of the 2006 National Team that captured bronze during the World Championships, was the head coach of the men’s team that won the gold medal at the 1993 FIBA World Championship qualifying tournament and was also at the helm of the men’s team that won the silver medal at the 1995 Pan American Games. 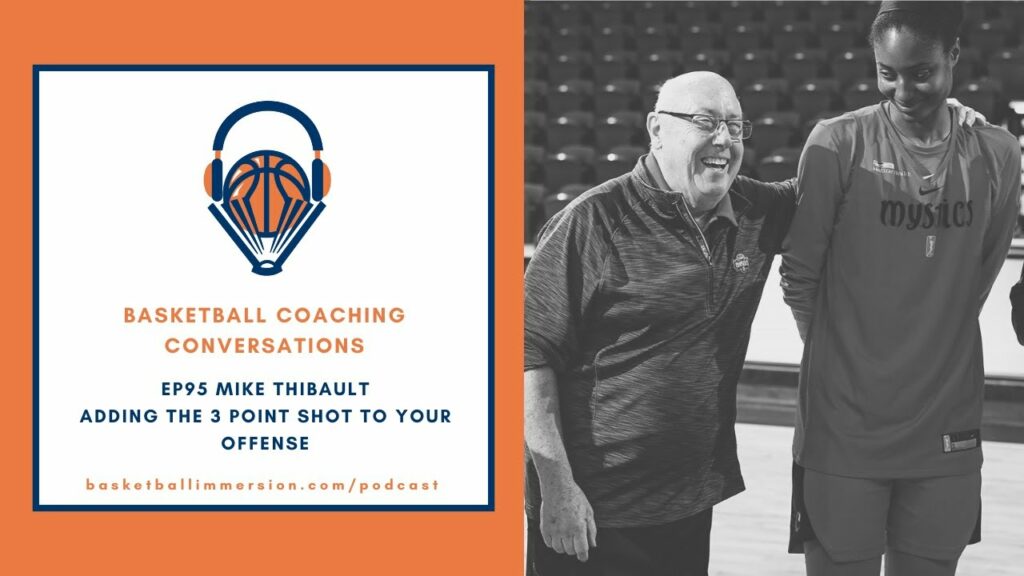 “We also use the NBA 3-point line as our guiding point . . in all of our off-season work . . it really improved our players’ concept of what good spacing was which allows better post entry passes, better driving lanes. .”

“I don’t yell at players too much for shooting the ball . . I don’t know that I’ve ever taken a player out for what I would call an open shot. I’ve taken them out for passing them up.”

“We always believed in if one post player is ahead of the pack that they should go ahead and run to the block early because we have good post up players and that draws defenders in transition back to the lane.”

“You’re going to get 4-on-3, 5-on-4 [situations in transition] . . how can you get quick advantages? . . We’ll tell that first post player up the floor, if you’re way ahead, keep running; if you’re running even with the ball, now it’s time to set . . a drag screen in transition and try to scramble the defense on the run.”

“You see more and more double drag screens which is two post players setting screens, one rolling and one popping . . you can make . . defensive players have to make decisions on the run, and that’s an uncomfortable situation.”

“We try to have sessions in practice where we call no plays and whether it’s 4-on-4 or 5-on-5 we try to do it and let them learn early in the season how to read off each other.”

“There’s a difference between being open and being seen . . even though you were open, did you move to the best spot where your teammate could see you?”

“Against closeouts, against hedges . . any kind of defense we think we’ll see, we’ll put ourselves into . . 2-on-2 or 3-on-3 drills that incorporate all those defensive looks.”

“Because of the switching, you have to spend a lot more time on what’s the best decision against a switch . . sometimes a guard can attack the post on a switch much easier than you can get the ball to the big in the lane.”

“A lot of our development work is learning different finishes at the rim . . to take contact, to get it over bigger defenders.”

“We have a Monday morning meeting almost every week during the season . . to say . . each player on the team, what’s our goal for the week on individual development.”

“I put a lot more time into player development things than we do in actual up and down practice.”

“Players aren’t always going to like everything you say to them, but I think they know that if you’re consistent and you are honest, you have their best interests at heart.”

“You have to have an honest reassessment of your season – of your players, of what you did, of your own coaches, what did we do well, what didn’t we do well and really be honest about it.”

“Spend time looking at college practices . . I like spending more time at practices than I do at games partly because it’s a better job of evaluating but part of it is you just learn new things.”

“The other kind of film we do is positive reinforcement film . . go back and find clips of ‘this is what it looked like when we were playing our best” . . we want to get that image back in their heads.”

“If I’m breaking down film of our own team . . what did we emphasize to our players. Let’s pick three things we emphasized going into this game . . did we do those well?”

“I also like to scout the other team’s coach . .try to understand that coach and their philosophy as best I can . . what are they going to do in crunch time? . . what do they like to do coming our of timeouts? . . what are their favorite things at end of games that I can prepare our team for.”

“I have stressed to my team for as long as I can remember that we won’t be as good as we can possibly be until our best players run the team.”