Baucom was hired as the Citadel’s head coach following the 2014–15 season. He was previously the head coach at Virginia Military Institute. He’s also served a coach at Tusculum, Davidson, Western Carolina and Northwestern State.

In 4 years at The Citadel

Prior to his time at the Citadel, Baucom amassed a 151-159 record with the Keydets of VMI. The Charlotte, North Carolina, native left VMI as the school’s all-time leader in wins. His 10 years represents the third-longest coaching tenure in Keydet history. Baucom, who led the Keydets to three Big South Tournament championship games, is one of two VMI head basketball coaches to post two 20-win seasons.

In 10 years at the Virginia Military Institute

“We just try to give the kids some freedom, try to teach them how to play . . and then play at the pace we want to.”

“To make us competitive . . with less talent, let’s do something that the other team is not going to be prepared for. The other 28 games they play during the year, they’re not going to face anything like what we do.”

“The 3-pointer’s a weapon. We try to get to the free throw line by driving the ball to the rim. So we’d shoot threes, lay-ups or free throws.”

“We try to space. We try to create gaps by cutting and then drive off those cuts. We also do some isolations. We try to put our players in the best position . . we try to exploit mismatches.”

“We’re always in some type of pressure . . a lot of them look the same but we’re trapping in different places.”

“I broke into coaching at 35 years old and eight years later I was a head coach.”

“We want to shoot it before we turn it over . . we’ll shoot the first shot that’s available and then try and go get it.”

“Our whole goal to get more shots is to turn you over and also to offensive rebound and play at a pace that allows more shots.”

“Shot preparation is key. A good pass leads to a good shot . . it’s something that we drill every day.”

“Transition in everything you do . . there’s never a point where we condition after practice, our conditioning takes place within that 90 minutes.”

“Everything we do . . there’s always a winner and a loser.”

“You have to be committed [to play this way]. I’ve been 100% committed to this ever since we doubled our win total my first year . . We’re bought in . . everybody on my staff . . and we recruit to this system.” 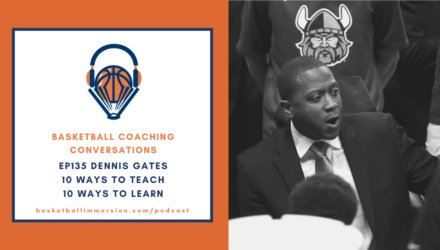