One of the most accomplished women’s basketball coaches in the nation, Gail Goestenkors, guided squads at Duke University and the University of Texas-Austin. During her tenure, she guided her teams to 18 consecutive NCAA tournament appearances, four NCAA Final Fours, seven NCAA Elite Eight appearances and a NCAA record seven consecutive 30-win seasons.
The WBCA Hall of Fame Coach was AP National Coach of the Year in 2007 and WBCA; Naismith Coach of the Year in 2003. Goestenkors was also a seven-time ACC Coach of the Year selection. Goestenkors was a two-time assistant coach for the gold medal winning USA Basketball Olympic team and Head Coach for the gold medal winning USA U-19 World Championship Team, where she was also named the USAB Coach of
the Year.
Goestenkors also served as a consultant and assistant with the WNBA’s Los Angeles Sparks and was an assistant coach with the Indiana Fever. Goestenkors most recently served as an Analyst for ESPN calling Women’s College Basketball games.
After enjoying a successful coaching and broadcasting career, Gail has entered the consulting business as Co-Owner of Coaching Full Circle. 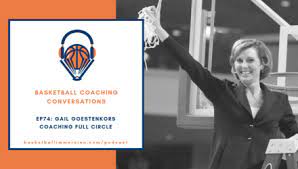 “When you’re coaching you have to be yourself . . just because something works for somebody else does not mean it’s going to work for you.”

“They [the players] became the best scouts. We might . . diagram all the plays, but they knew the tendencies . . They helped me as a scout and as an assistant coach to know the best way to attack certain players . . “

“I love putting the players in front of the team throughout the season because I know it helps them in so many ways, to just be able to gain confidence and have those leadership qualities.”

“You have got to be able to find a way to connect with the players that you are recruiting and with your own team . . many of them are on social media . . so that’s got to become your friend.”

“I would recommend to any college coach, go to the WNBA preseason practices because they’re really phenomenal because they have to put in so much so quickly.”

“I always had . . one of my assistants in charge of special situations and she would always have my top five plays I wanted to run.”

“As a head coach, you have a responsibility to help them [assistant coaches] grow.”

“I would always ask my staff, ‘Should I have made this call here? Is there something else we could have done? What about this substitution?’ I needed feedback from the people that I trusted.”

“Even before every practice, I would break down the tape of the practice before . . and I would always have ‘plays of excellence’ and ‘plays for improvement.’ . .That’s how we always started practice.”

“I had a lot of sets which worked for us. But going back now I would prefer to just teach the players how to play the game and then let them play the game.”

“If you set one or two good screens, you’re going to get a good shot.”

“Know who you are. Develop a mission statement of who you are and what you stand for.”

“Hire to your weaknesses . . trust is paramount but you need to hire people who can have open, honest and very difficult conversations with you. They will make you better because they’re going to make you think.”

“When you accomplish something you don’t think you can do, there’s a bonding that goes on as a team.”

[On giving players journals] “I’m going to look through them and then we’re going to meet individually and we’re just going to talk about life. Nothing about basketball . . the journal is going to guide me so we can expand more on what they’re saying, what they’re thinking and what they’re feeling.”

“You have to re-recruit your players daily.”