In this week’s basketball coaching conversation, basketball coaching legend Ettore Messina joins the podcast to share insights from Europe and the NBA. Messina is the head coach of Olimpia Milano of the Italian Lega Basket Serie A (LBA). Messina most recently worked with the San Antonio Spurs as an assistant coach for Gregg Popovich from 2014 to 2019.

Ettore Messina spent four seasons at the helm of CSKA Moscow where he led the team to two Euroleague Championships in 2006 and 2008 and four consecutive Russian SuperLeague titles from 2006–09 before a brief appearance with the Spanish League’s Real Madrid—sparking his jump to the NBA as coaching consultant for the Los Angeles Lakers in 2011–12. After a two-year reprisal of his head coaching role with CSKA Moscow, he found his way the San Antonio Spurs sidelines in 2014.

Learn more about the international game: 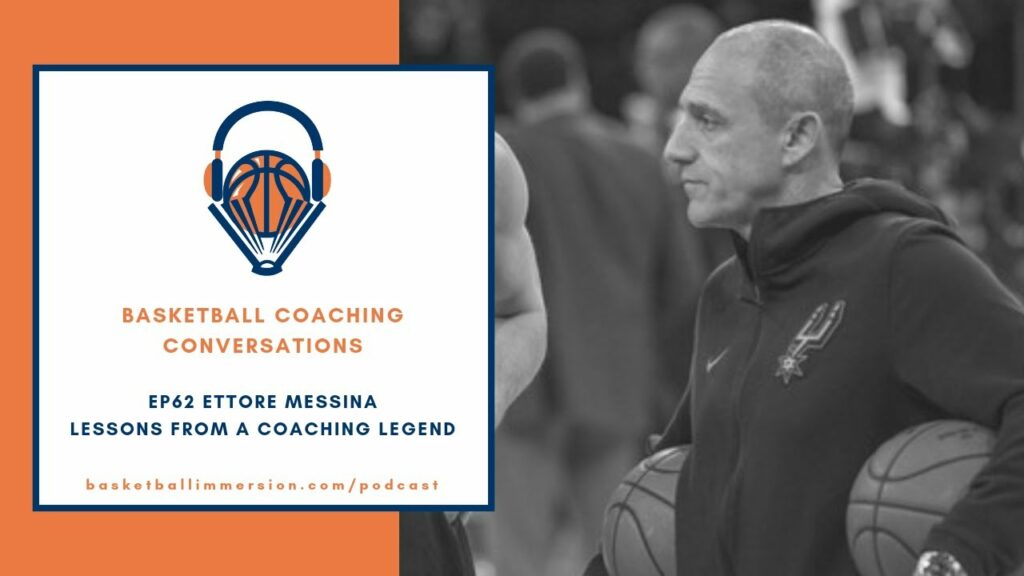 Q: “What are some things you’ll bring back from the NBA to Europe?”

A: “Addressing the workload of the players, being more essential in game preparation, using the little practice time that you have . . “

“More than teaching I think is there is the attention to it [spacing] . . People are more and more focused on not letting one defender guard his own man and at the same time bother another . . “

“More and more teams are becoming better and better at attacking that shift guy with a backdoor cut, with a catch-and-go off the dribble . . “

“Watch film . . it’s got to be, in my opinion, selective film. You can’t show 20 clips. You’ve got to have three or four good clips that make your point then you get back on the court.”

[On player development] “There is attention to the person and to his needs and how he sees himself as a player more than wanting to impose a vision . . This idea of really growing people before growing players . . is very, very important. It makes a huge difference.”

“There is also clear attention to what the weaknesses are that might prevent him from becoming . . an NBA player and then [we] work to correct those . . problems and those weaknesses.”

“Recovery has become a huge, huge factor in helping your team to perform at the right level.”

“Traveling is the very first tool to understand people . . visiting them and understanding their culture.”

“Defensively, if you can take away the transition points and the second chance points, theoretically, it’s very hard for any team, including the Raptors or the Warriors, to score more than 80-85 points.”

[On defending the pick and roll] “Pick up points are becoming more and more important because the higher you can pick up the ball handler the more you can sneak under on the first pick and roll.”

“You need players that, when you walk out of the locker room, reinforce your message and they let everybody understand that what you said is what the team needed . . sometimes regardless of how you said it.”

“Character is such an important quality that you have to pursue in any kind of activity.”

“There are concepts that are basic in terms of how you would like people in your organization to relate to each other . . respect is a major one . . It’s easy to respect the important people and maybe lose attention to the people who are working in the shade. Treat everyone the way you want to be treated.”

“If you want to expect something from a teammate, first of all, you have to do your own job.”

“Sometimes we get really excited . . with the basketball skills and we lose track of the character. Character is skill number one, I would say.”

1:00 – Differences between his Clinics and Practices
2:00 – Strategies to Help Yourself remove Emotions in practice
3:30 – Things that Messina can bring back from NBA to Europe
5:30 – One thing that transfers from NBA to Europe in terms of Technical and Tactical
7:10 – Unique Styles
8:30 – Things that Messina can bring from Europe to the NBA
10:00 – Two Rules
11:00 – Popovich’s Ideas for Spacing and Passing
13:00 – Things that Gives Attention in Spurs Coaching
14:30 – Happening in the Spurs Developmental System
16:30 – Underappreciated about the NBA
18:30 – Danger of not Practicing Enough Now in the NBA and Europe
21:30 – What Coaches in the NBA underappreciated about Europe
24:00 – Understanding Different Players through Traveling
25:30 – How Messina Marry His Basketball Philosophies
27:30 – Ball Screen Defensive Philosophy
30:00 – Lot More Switching in European Basketball
31:00 – Start Implementing Coach Ettore’s Defensive System
32:30 – Ways to Make Players Hold Each Other Accountable
35:00 – Character is a Number 1 Skill
37:00 – How To Balance and Prioritize everything as a Coach
39:00 – Example of Focusing on the Team
42:00 – Focusing on Self and the Team rather than the Opponents
44:00 – Conclusion