With 173 career victories, Ted Hotaling stands second among nine head coaches in the history of the New Haven men’s basketball program and with 27 more wins would become just the second coach in program history to win 200 career games. The 2022-23 season will mark his 12th season strolling the sidelines of Charger Gymnasium.

Ted Hotaling led the Chargers to back-to-back appearances in the Northeast-10 Conference Championship game, a pair of nine total appearances in the conference tournament under his tutelage. In addition, Hotaling’s teams have earned four bids to the NCAA Division II National Tournament, the most recent coming in 2022.

Highlighting his 173 career victories was a 79-68 win over crosstown rival Southern Connecticut State University on February 15, 2016 which earned Hotaling his 100th career victory at the helm of the Blue and Gold, becoming the fourth coach at New Haven to reach the century mark. Three years later, to the day, Hotaling earned his 150th career victory when the Chargers posted a 72-61 home win over American International. Overall, Hotaling’s .558 winning percentage ranks third in program history, while his record of 55-45 through his first 100 contests was the best since 1995. 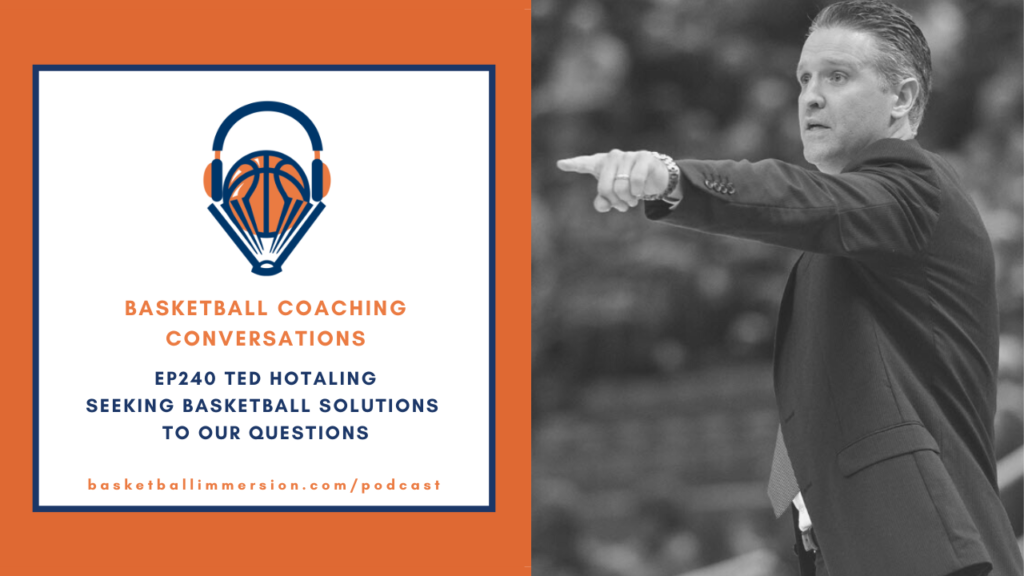 “I think our job as coaches is to evaluate ourselves and try to find better solutions to help our players . . we’re trying to get to the point where we’re helping our players as best as we can.”

“We’re just trying to coach and correct the right things . . I think as you get older as a coach and you evolve, you have to pick and decide what things you are really going to emphasize. For me, it’s always what causes you to lose . . we’re going to try and coach those things every single day and, when we see them, we’re going to try and address and correct them immediately.”

“If you don’t correct things that are important to you, it gives your players an indication that maybe it’s not that important to winning.”

“Offense is one thing: two to the ball, make a great decision. That’s it. That’s all you have to do to be a good offensive team. Obviously, the passing, the catching, the layup-making, and the shooting is important, but we’re just trying to bring two to the ball.”

“We don’t have a problem confronting our guys about, ‘This is good for you, but not good for him.’ It’s not the same for everybody. We’re pretty direct with that conversation.”

“If you have a system that you can fall back on, it can serve as your talent . . when we have good talent, we have less sophistication with our offense. When we have lesser talent, it’s more sophisticated with the offense with more play calling.”

“As you evolve as a coach, you’re always trying to do less, and do it at a more effective way.”

“You’re trying to design a system that helps your players play well. You want it to be sophisticated, but not complicated, but not so simple where it’s not useful. We’re always trying to take away.”

“I think you’re constantly trying to receive data to try to help your players play better, and help them win. And when you talk too much, it’s really hard to do that. For me, how I’ve evolved is just letting things happen; watching more, interrupting less, and being really confident in saying we can address it tomorrow, or I can address it with him after practice. Or I can create a drill for that in some way or shape pre practice for this young man.”

“If you ask any player what they want, they want to play more and they want to drill less. Now, it has to be a good balance there . . and I think we can coach out of that more effectively. We get more on film . . It’s hard to film drills because they’re playing the drill. But when you play 5-on-5, we’re also getting a ton more data because we can watch practice film and have more data to show them.”

“We were trying to minimize our mistakes with recruiting and get the right people in the program. And then we just overhauled the program as far as what we believe in, and what were the behaviors that we were going to attach to those values.”

“What we’re trying to coach every single day is our players’ response to positive and negative events and trying to coach them through that, trying to get them into a place of neutrality where they’re neutral about it and not up and down.”

Ted Hotaling Links from the Podcast: