In this week’s coaching conversation, SMU head coach Rob Lanier joins the Basketball Podcast to share insights on coach speak and his core values for his program.

Rob Lanier, who came to the SMU from Georgia State, arrived with more than 30 years as a collegiate coach, including seven seasons as a head coach. His teams have made 12 NCAA Tournaments and earned 19 total postseason bids. Those teams also have five conference titles, three regular season championships and two tournament crowns, plus five more trips to a league tournament final.

In addition to being the head coach at Georgia State and Siena, Rob Lanier has been associate head coach or an assistant coach at Tennessee, Texas, Florida, Virginia, Rutgers and his alma mater, St. Bonaventure. Lanier has played a role in signing 10 McDonald’s All-Americans, and 11 players that he either signed or coached have become NBA Draft Picks.

After arriving at SMU, Lanier was named a training camp coach for the USA Basketball Men’s U18 National Team. He worked with the team in Houston prior to its gold-medal run at the FIBA U18 Americas Championship in Mexico. 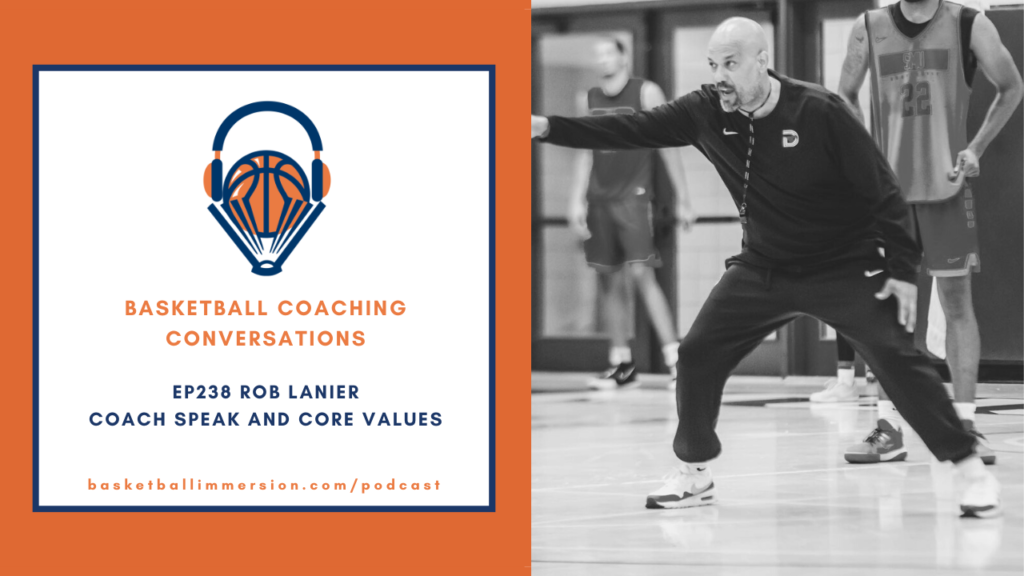 “There are so many unique experiences that you have in our profession, dealing with young people and your love and passion for the game.”

“They [Billy Donovan and Rick Barnes] take their passion for the game and they channel it through service to others. And then there’s a competitive spirit that ties it all together.”

“We found something that worked for us, and we got pretty good at it. We found this summer, this team is not suited for that . . as our base offense, as the thing that we teach day in and day out. We have to think outside of what we did the last three years and really hone in on what we have and how we can best utilize [our personnel].”

“We want to help as many people as we can, and we’ve got family and people and relationships that we built over the years. We’re going to try to be a blessing to as many people as possible. But the decisions we make, the things that we do, are about our family. And so the biggest key for any young coach is to make sure you do a great job communicating.”

[On core values] “Humility, respect, and responsibility. We start each year and we talk about it all the time. And eventually these guys will internalize it.”

“In general, young people who think they have all the answers, who already think they’re a finished product, deny themselves the opportunity to truly improve and become the best version of themselves.”

“This whole college basketball experience is really fleeting . . With the time you have, how are you going to make the most of it? The more humility you have in your character, the more time you’re going to spend in the gym, the more grateful you’re going to be about the opportunity to get an education, and better the relationships . . that will serve you beyond your time on a college campus.”

“There’s a level of respect that you have for people, time, the law, women, all of these things, that stems from a starting point of humility. And then the responsibility piece is twofold, we want people to take responsibility, not only for the task that they have to do, but also the accountability piece for your actions.”

“When you’re trying to engage with a new group of young people, there are your words but you need them to be fortified with the people that you’re aligned with.

“My advice to older coaches is to detach yourself from how you were. And don’t coach a kid while comparing them to how you were. Coach them based on where he’s at, based on who he is, and get to know him well enough to find out where he is.”

“Young people are wired the same way we were . . They want to be successful and they’re trying to figure out the world, but they’ve got so much more clutter to get to that. Whatever time you have with them, you have an opportunity to clear some of that debris for them, so that they can see things more clearly.”

“The most important thing in our profession is to create a good reputation based on how hard you work, how you treat people, and your ability to communicate. Try to get good in those three areas: work really hard, try to develop as a communicator, and treat people with love and respect.”

Rob Lanier Links from the Podcast: