In this week’s coaching conversation, Hope College head coach Brian Morehouse joins the Basketball Podcast to share insights on culture and the Hope College We Pyramid.

Brian Morehouse ’91 has developed the Hope College women’s basketball team into one of the nation’s elite programs during his tenure, guiding the Flying Dutch to national championships in 2022 and 2006 and a national runner-up finish in 2010. Brian Morehouse has been chosen as the Division III National Coach of the Year three times by the Women’s Basketball Coaches Association (2021, 2020, 2006). He was also named Division III Coach of the Year by D3hoops.com (2019-20).

Through the 2022-23 season, the Flying Dutch have won 658 games and 17 Michigan Intercollegiate Athletic Association championships. Brian Morehouse teams have made 20 NCAA Division III Tournament appearances. Morehouse has been named the Michigan Collegiate women’s basketball coach of the year by the Basketball Coaches Association of Michigan four times in his career (2001-02, 2007-08, 2011-12, 2015-16). Morehouse is ranked among Division III’s elite active coaches by winning percentage. After the 2022-23 season, he is ranked second in winning percentage (87.4%).

Courtney Kust has been a member of the Hope College women’s basketball coaching staff since the 2014-15 season. She helps with recruiting responsibilities, scouting reports of opposing teams and player skill development.

In 2018, Kust was named a member of the Women’s Basketball Coaches’ Association “Thirty Under 30 Class,” a distinction that recognizes 30 up-and-coming women’s basketball coaches age 30 and under at all levels of the game. Kust played basketball for the Flying Dutch from the 2009-10 to the 2012-13 season. She was a member of the 2010 national runner-up and a captain her senior year. 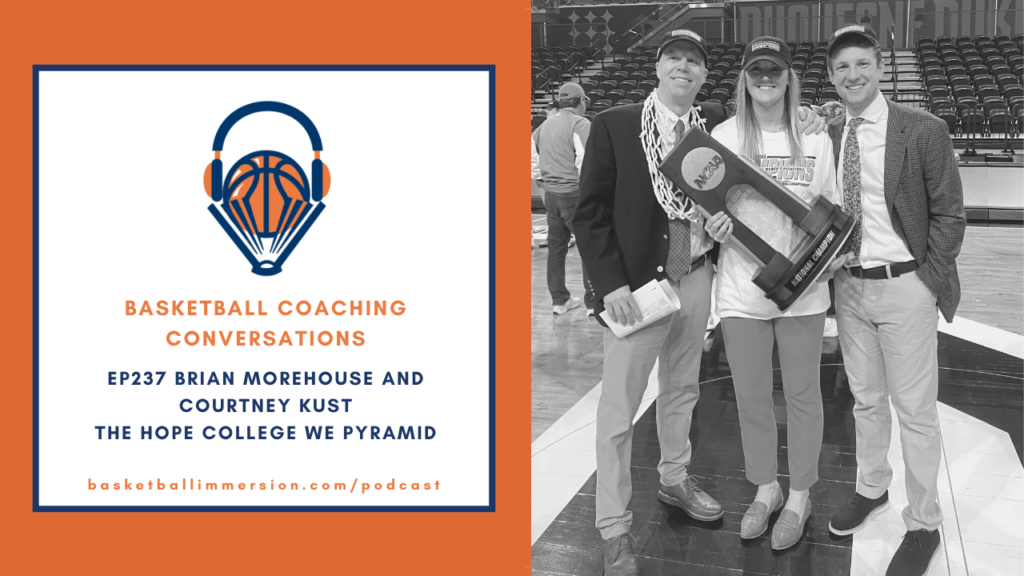 Coach Morehouse:  “For us, ‘W.E.’ stands for ‘Win Everything.’ . . For us, it’s a lifestyle. It’s a series of daily habits of every interaction that you have . . we want to instill in our players the fact that when you wake up in the morning, you’re going to have a series of opportunities to make a decision. And that is going to form your habits . . the goal is to build great women that then carry these habits with them for the rest of our lives, in relationships, in their jobs, and how they wake up each morning and try to live their lives with excellence.”

Coach Kust:  “If you have a big goal, how do you break that down and make that more of like a daily reality? So we have this W.E. pyramid . . we start with the smallest things, pick up after yourselves, saying ‘thank you’ to people, how can you just be a good person everyday? How can you win the moment? Again, we believe that you can either win the moment or lose the moment, we don’t really think there’s like a neutral there. So, we’re always encouraging our players to try to win all the moments that they have throughout the day and relate that back to basketball with a big goal in mind.”

Coach Kust:  “Daily habits for us are very intentional, they’re very focused, we rethink it every year. We check things, we cross things off, we add things, we edit, we do things that are specific to that year, and that team’s identity. So, it’s really intentional starting with all the small things, which I think adds up.”

Coach Morehouse:  “We talked and we really looked at ourselves as coaches and everything. All that stuff kind of goes into, ‘we want to win the national championship.’ It’s not a failure of a year if we don’t, as long as we’ve done all the necessary things to give ourselves the best chance to get there.”

Coach Kust:  “We talked about it this summer. Are there things we really want to emphasize this year? What’s the mentality we want to have going into the year and then really do a deep dive . . where we kind of refine what’s specific for this team?”

Coach Morehouse:  “We’re taking what they’re hearing on the bench in practice and in games, and we’re trying to apply that so that they’re cognizant of that each day in practice, and that they’re playing to a standard.”

Coach Kust:  “We talk to our players a lot about how they talk to themselves, positive self talk. I think that as women and also as college athletes, they’re pretty quick to go negative. I think we have a lot of perfectionists on our team, and they hold themselves to a high standard, so we just want to keep celebration in the forefront of our mind . . your goal, as a teammate, is to be each other’s biggest fans. Yes, there’s some competition in playing time, but at the same time, when someone’s on the court, and they do something well, you are expected to celebrate them and find joy in building them up.”

Coach Kust:  “How do you start your day? When you wake up in the morning to when you go to bed at night, are you letting your thoughts drive you? Or are you driving your thoughts?”

Coach Morehouse:  “I think you get what you emphasize. And the longer I’ve done this, the more I realized that you can’t emphasize everything.”

Coach Morehouse:  “Did you have a bad 15 minutes? Or did you have a bad day? I think so often, our brain goes to that bad 15 minutes, or maybe that bad interaction with a professor, or maybe that bad moment in practice, instead of saying, ‘There were hundreds of great moments today.’ So, where do you go? And what do you choose to reflect on and focus on? I think that’s important.”

Coach Kust:  “Be present. Show up and be there.  Check your baggage at the door . . Let practice be your two hours of just showing up for your teammates and showing up to get better and not be worrying about all the outside distractions.”

Coach Morehouse:  “Perfection is not the goal. Improvement is the goal.”

Coach Morehouse:  “Everybody brings different stuff into the program, and everybody evolves at a different rate. And it’s never fast enough, but you’ve got to be okay with giving it time.”

Coach Kust:  “I think that the daily reps, and the doing it over and over and over again, is something that we’re really proud of and I think that it’s something that we’ve seen throughout time to really work. And again, none of this works if you don’t have people that want to embrace it and people that live it out . . the bigger goal is . . are you a strong, confident, independent woman who’s ready to take on whatever comes next?”

Brian Morehouse Links from the Podcast: