Armed with a collegiate coaching résumé that includes 24 years and a head coaching record of 303-169 Sather has built a pair of national-contending basketball teams at his two head coaching stops, Black Hills State and Northern State. Prior to that, he was a five-year assistant at Northern State, his alma mater, under legendary head coach Don Meyer.

A year prior, an early 18-game winning streak propelled the Wolves to a program-record 36 wins and all the way within a missed buzzer-beater of an NCAA Division II championship. He was named both the NSIC and NABC Central Region Coach of the year. His team was again among the elite in the country in a myriad of statistical categories, finishing in the top 20 in scoring defense (66.1) and rebounding margin (+7.8), in the top 10 in scoring margin (+14.1) and in the top five schools in field goal percentage (51.2).

Sather launched his head coaching career at Black Hills State (Spearfish, S.D.) in 2005. In five years there, Sather was instrumental in turning the BHSU program around from a 10-19 season in 2006-07 to an NAIA Final Four contender in 2008-09. The Yellow Jackets also qualified for the national tournament in 2009-10 and compiled an overall conference record of 46-25 in the five years under Sather, including winning two Dakota Athletic Conference championships. 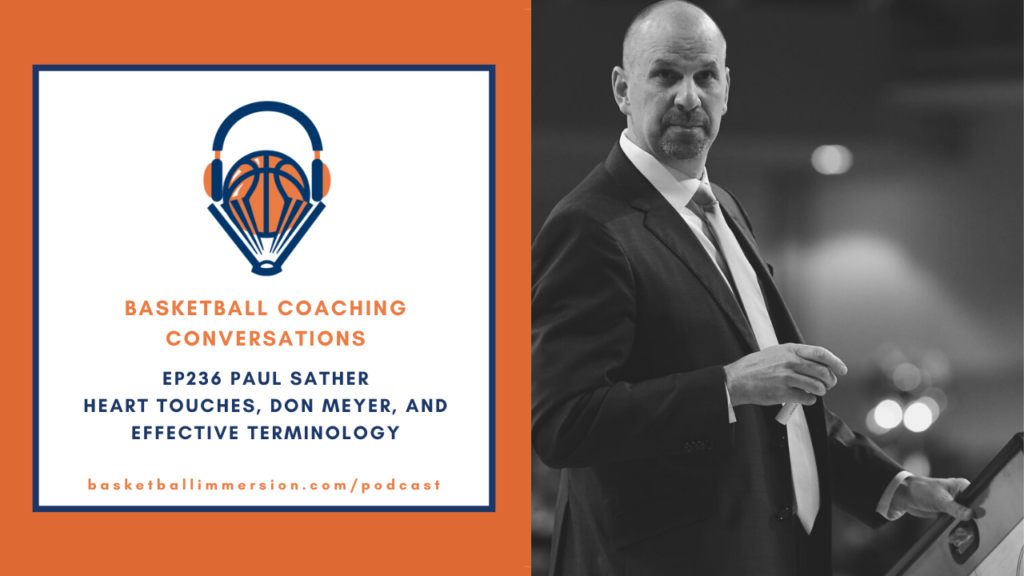 “Anytime you become a head coach for the first time, you’re really trying to find your identity . . you’ve got to find who you are and be true to yourself.”

“You build a program by recruiting quality young people . . that really want to buy in and be something bigger than themselves. You build it and it takes a little bit of time.”

“You want to play low, but you can’t play too low. You’ve got to find the spot that works for you to move and have balance and play at a high rate of speed without losing balance.”

“With some of these young people that don’t have good footwork, let’s try to get some consistency, because I do think it’ll help not just your shooting, but your ability to attack and the ability to be shot ready on catches and attack defenses.”

“You don’t have to have a million moves. We really believe in getting your work done before you get a catch. And so we work a lot on timing,”

“The quarter turn is a really important teaching tool on a post touch Plus, when you do catch and get your feet shifted to the middle a little bit more, you see the floor so much better.”

“At the end of the day, you want them to have to get a catch well off the block where you can shrink the floor somewhat to have some sort of impact and take that post out of his rhythm.”

“Our best defensive teams weren’t always just the best five athletes, a lot of times they were the best five guys that were tough and that could figure it out.”

“At the end of the day, it’s not about you as the head coach. It’s about what can we do?. . How do we bring out the best to make our team the best?”

Paul Sather Links from the Podcast: