In this week’s coaching conversation, University of Utah head coach Lynne Roberts joins the Basketball Podcast to share insights on smart box scores and bringing it to life in practice.

Entering her eighth season in 2022-23, the Utes’ first NCAA Tournament since 2011, Utah has eight letter winners and four starters returning to Salt Lake City along with a talented recruiting class, including adding the 2018-19 Pac-12 Freshman of the Year to the squad.

In her seven years in Salt Lake City, Lynne Roberts the Utes have appeared in the postseason in four seasons and have had four 18+ win seasons, including two 20-win seasons. The 20-win season in 2018-19 was the first since the 2012-13 season. The Utes won 21 games in 2021-22 and advanced to the NCAA Tournament, which was the first appearance for Utah since 2011. After receiving votes in the AP and coaches polls in her first three seasons, the Utes jumped into the Top 25 for the first time in a decade in 2018-19, ranking as high as No. 14.]

Lynne Roberts came to Utah after nine seasons as the head coach at the University of the Pacific in Stockton, Calif., where she was a two-time conference coach of the year (2012-13 Big West and 2014-15 West Coast Co-Coach of the Year). Prior to Pacific, Roberts spent four seasons as the head at Chico State, where she compiled an 86-31 overall record. During her final season, the Wildcats were 28-4 in 2005-06 and advanced to the NCAA Division II Final Four. 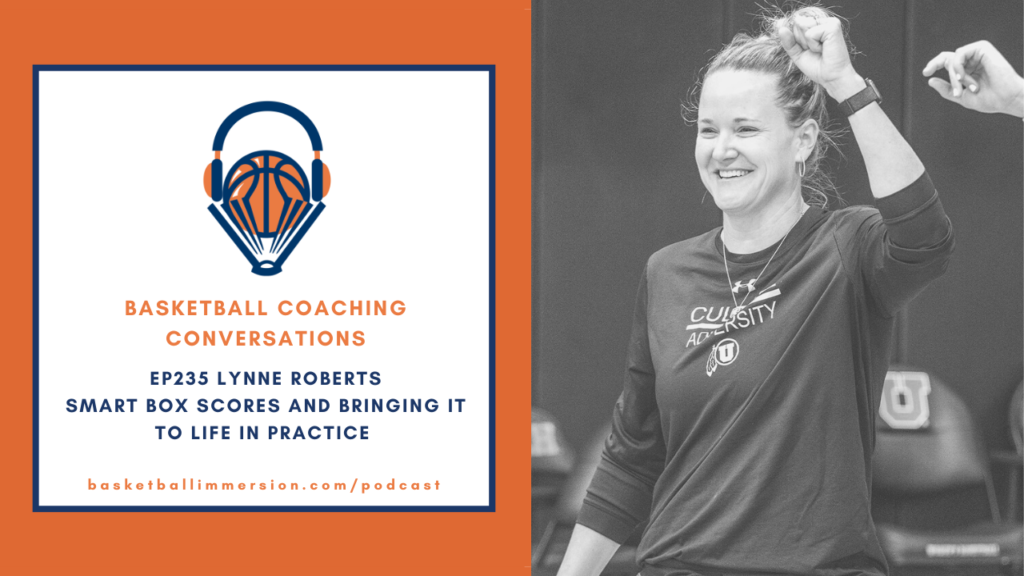 “I think basketball is a really simple game. The objective is to score the basketball. How do you do that? You beat your man. If you beat your man, and someone else helps, then you pass it to a teammate.”

“So, I say that all the time, ‘Don’t run a play, make a play.’ And then we just do a huge focus on shot quality. Our philosophy is take the first great shot we can.”

“If we can keep the ball moving, keep our players moving, that’s moving the defenders. It’s pretty fun . . and it’s absolutely predicated on unselfishness.”

“We have a good pass rate. We’re not assist hunting, we’re just trying to get the best shot we can.”

“There’s definitely a structure but we’ll run different things all the time within that structure. Players then have the freedom to make a play. It’s really hard to scout.”

“If you’re tough and you want to be a good rebounder you can. And so, it was just a non-negotiable. If you want to play, you’re going to rebound. If you don’t rebound, you won’t play. And there’s no greater motivator than playing time.”

“What are what are the things that contribute to winning? So much of it is effective field goal percentage, and making sure that you’re not turning it over.”

“We have a whiteboard in practice that we use. There are six categories, and every player has their name on the whiteboard. It’s a big whiteboard and it’s charted live . . you can’t stop practice every time someone turns it over, but you can make them aware of it.”

“Then it comes down to the chances so we chart rebounding . . you could chase down a rebound, like crazy and not come up with it, you’re still gonna get rewarded for that . . So again, it’s not just the number of rebounds, it’s the number of pursuits.”

“I think so much of turnovers is kids trying to do too much. Let the game, let the spacing, let the movement create shots. You don’t have to create a shot for somebody else every time you touch it or for yourself.”

“There’s a push and pull of learning in practice, what you’re capable of doing. And it’s not perfect, but my role is I have to teach, rather than discipline . . teach through practice, through live play.”

“These are young people that really want to do well, and they want to do right. Our job, as college coaches, is to help them along. Sometimes they need a kick in the tail, but most oftentimes, they just need some good instruction and some encouragement.”

Lynne Roberts Links from the Podcast: