In this week’s coaching conversation, Towson University head coach Pat Skerry joins the Basketball Podcast to share insights on flow game offense and winning where they haven’t before.

When Pat Skerry was announced as the 13th men’s basketball head coach at Towson University in 2011, he took over a program that had endured 15-straight losing seasons. He has revitalized the Towson men’s basketball program, leading the Tigers to consistent success in the Colonial Athletic Association (CAA). In addition, under Skerry’s leadership, Towson has the highest Graduation Success Rate (GSR) in the CAA.

Towson enters the 2022-23 season having won at least 18 games in seven seasons in the last 10 years.

Pat Skerry led Towson to the program’s first-ever CAA regular season title and berth into the National Invitation Tournament during the 2021-22 season. The Tigers finished 25-9 and 15-3 in the CAA, with three players earned all-league honors including Cam Holden and Nicolas Timberlake on the First Team. It was the winningest Division I and CAA season in program history. Skerry was named a finalist for the 2022 Skip Prosser Man of the Year Award and 2022 Hugh Durham Award.

In summer 2021, Pat Skerry was selected as a court coach for the USA Men’s U19 World Cup Team, being one of three coaches across the country selected for this role. He assisted the U19 coaching staff with on-court drills and scrimmages during the camp sessions on the campus of TCU. That team went on to win the 2021 FIBA U19 World Cup in July.

The Tigers have participated in three postseason tournaments since the 2013-14 campaign. In 2015-16 and 2016-17, Towson finished with at least 20 wins the second time in school history that Towson has won 20 games in consecutive seasons. Towson’s 25-win year in the 2013-14 campaign was the highest amount of victories in a season in Division I and most since 1977-78. 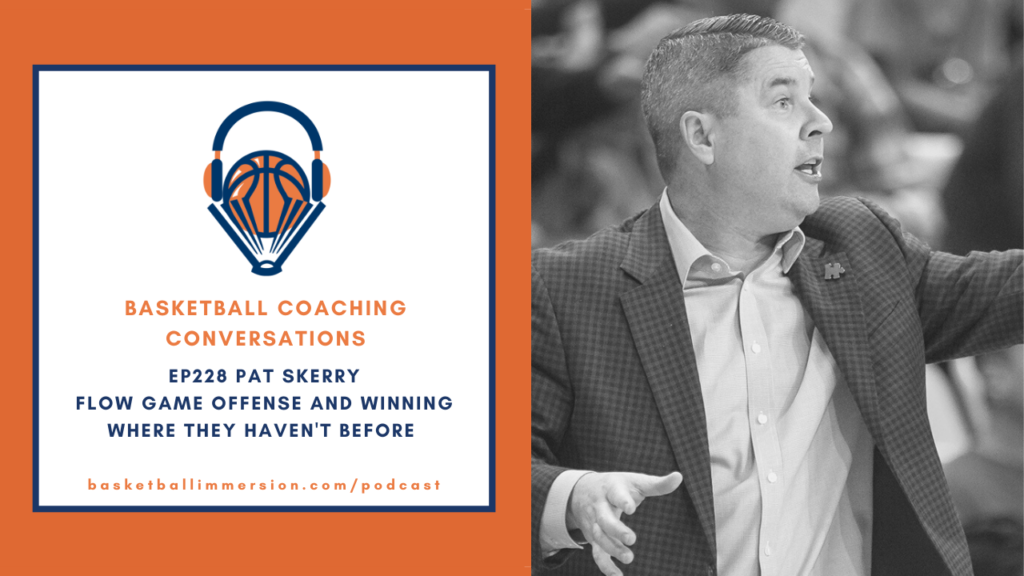 “In sports, the hardest thing to change is tradition and geography . . when you go in to build something, there’s a chance to change it.”

“Basketball can be a great front porch for the rest of the house which is the university . . what gets me up every day is, ‘Can we kick the door in and bring some recognition to our university, which is really a great place?’”

“Hopefully, if you watch us play now you’d say, ‘They play hard, but the ball movement really defines them.’”

“The last two full seasons we’ve had, we were in the top 12 in the country, in fewest live ball turnovers. That’s something we’ve really harped on . . by really cutting down on our live ball turnovers, it just keeps you out of harm’s way.”

“Normally, we will run a special after made basket, free throw, dead ball timeout. And the reason behind that has been to take advantage of scouting.”

“We do designate spots. Whoever has the ball is the pusher, his job is to try to attack the elbows. And that’s been a focus.”

“Sometimes players think, ‘I haven’t gotten an opportunity in the game,’ and it’s always, ‘No, you’ve got your opportunity every day in practice, that’s where you either build trust or distrust.’”

“With spacing, it’s usually because guys aren’t on hold in the corners . . they’re creeping in, they want the ball . . the better your spacing is, the harder it is on the defense.”

“When the ball is going away from you, you’ve got to fill so that that the guy has an outlet to throw it to. We’re trying to do a better job of when the ball’s coming to you of not just spacing but can we 45-cut? Can we baseline cut? Can we flare? Just trying to do something to occupy the defense.”

“The more we can play with less scripted action means one, the more trust you have in your guys and it contributes to better ball movement.”

“A really talented assistant, Luke Murray, showed me stats in the NBA, after live ball turnovers if you don’t finish in the red zone, how much that affects your transition.”

“I’ll use the phrase a lot, ‘Follow your training.’ . . whether it’s protection plans or spacing, we’re just looking for good shots. Sometimes the definition of mental toughness is just taking the right shots for the team. Even if you’ve missed it, that’s a good shot.”

“I’ve always felt . . you’ve got to develop a routine in order to develop good habits . . how do we create a positive peer pressure culture to form some of those good habits?”

Pat Skerry Links from the Podcast: