In this week’s coaching conversation, Denver Nuggets assistant coach Popeye Jones joins the Basketball Podcast to share insights on how to teach a routine to become a pro.

Popeye Jones was selected by the Houston Rockets in the second round (41st overall) of the 1992 NBA draft, but his rights were traded to the Dallas Mavericks. After playing professionally in Europe for a season, he played for the Mavericks for three seasons until being traded to the Toronto Raptors. Jones also played with the Boston Celtics, Denver Nuggets, Washington Wizards and Golden State Warriors. 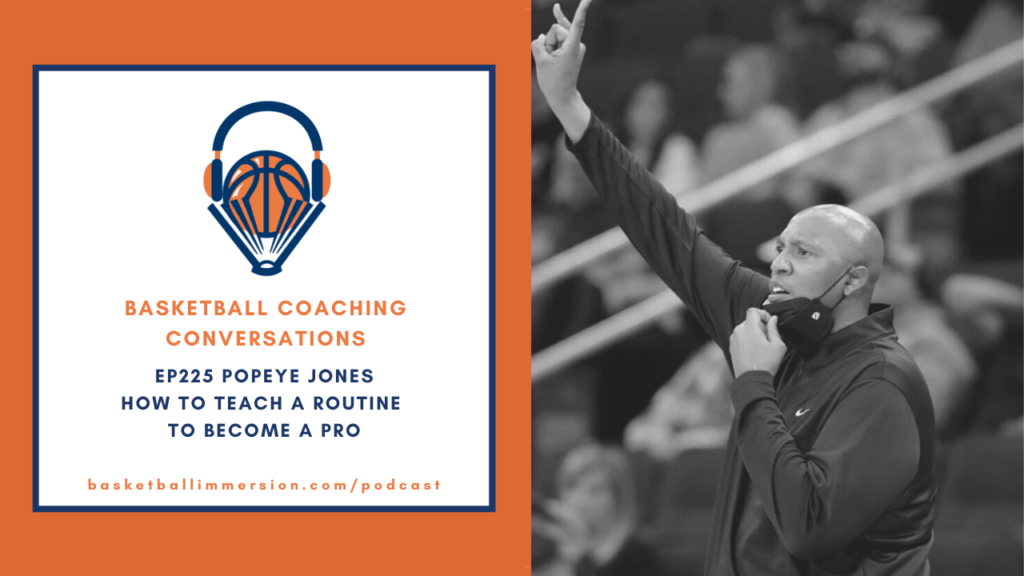 “As a pro, you’ve got to understand, how do I establish the routine that is best for me? I’m always on time, which is really important. I’m coachable. And not only that, I’m a good teammate . . teaching a routine and how to develop that routine during the season was important.”

“We have a meeting at the end of the season . . [about] what we want our guys to improve on during the offseason . . and then we establish a plan for the guys that we draft.”

“I think the biggest thing that has come about in player development and one-on-one time with players is you try to carve out five to 10 minutes of some kind of defensive component . . whether it’s . . closing out, keeping the ball in front, working on your hands to get deflections.”

“We would have classroom time in August and September for the young guys. And it was only just to teach terminology, I would show maybe 10 offensive clips, 10 defensive clips, and we will start implementing our terminology when training camp starts.”

“Guys are really listening to the blueprint, and how to be successful, and how to have a long career . . they’re coming in so early because they know that that second contract is usually your payday.”

“That’s another part of your development . . mentally because you’re getting pulled each way. This guy needs this, somebody needs money for this, another person needs money. And that wears on young guys. And it’s hard for young guys to say no. But at the same time, it can really really mess up your development.”

“It’s not a competition, being coaches and we don’t look at it like that. We’re just hoping that we can get through to him [the player] and teach him what we need to teach him. And it doesn’t matter how that breakthrough happens. We’re both happy when it does happen.”

Popeye Jones Links from the Podcast: