Mike Weinar, 37, is in his second season with the Pacers. He joined the Pacers coaching staff in 2021, after spending the previous 13 years with the Dallas Mavericks, including four as an assistant coach. He was a member of the 2011 NBA championship staff.

Prior to joining the Mavericks, Weinar worked with the University of Florida men’s basketball program under head coach Billy Donovan. Weinar served as a graduate assistant from 2006 to 2008. From 2003 to 2006, Weinar served as a student manager. During his tenure at Florida, he was a part of back-to-back national championship teams in 2006 and ’07. Weinar also served as an assistant basketball coach at his alma mater Bronson High School.

Born in Urbana, Illinois, Weinar earned his master’s degree in sport management and his bachelor’s degree in exercise and sport science with a minor in business administration from Florida. Weinar has extensive experience coaching and speaking at camps and clinics both domestically and internationally. 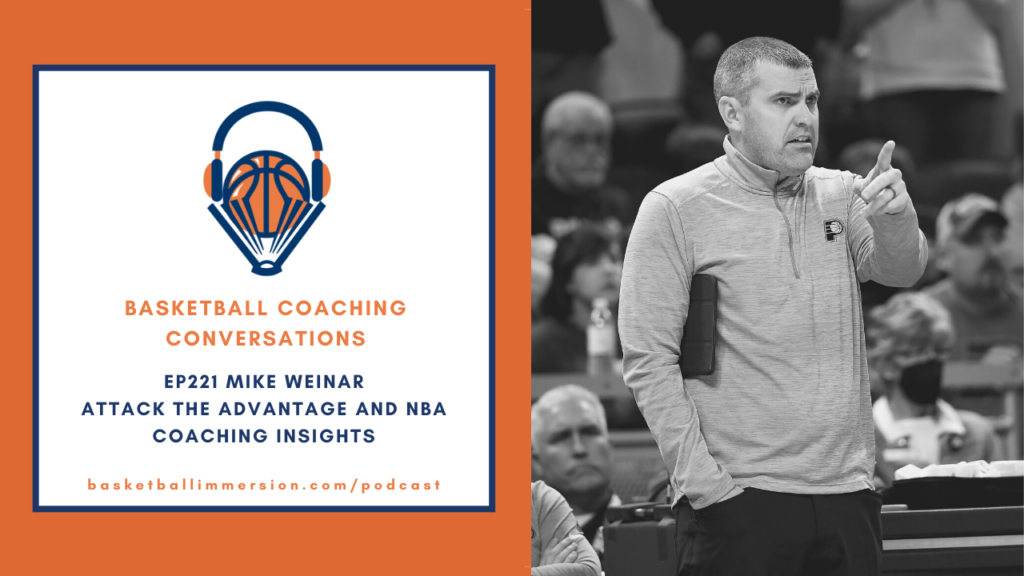 “We want to have a hierarchy of shots shot profile, you’re going to shoot the highest percentage . . right around the rim . . So, we want that shot at the rim, that layup at the rim. And we consider that our gold medal . . if you can’t get the gold, you’re striving for the gold constantly . . but if you can’t get the gold, we’ll take the silver which is a catch-and-shoot three.”

“The bronze is the mid range shot, the non-rim the non-paint shot, whether it be floater or pull up. And certainly those shots are more efficient for certain players. It’s a shot that we might have to take and we’d rather have the bronze than no metal at all and turning the ball over . . we want to be on the medal stand no matter what, even if it is a bronze.”

“We’re in this to put our players in the best position to succeed so that as a unified group we can come together and get to that next level, whatever the level that may be.”

“You have an overall but your philosophy may not fit the roster you’re given as a coach . . I do think that you have to build around what the concepts of your top echelon players are and that may not be just on offense [but also] how does that factor in the defense?”

“What’s the advantage? . . Where do we gain the advantage either in tonight’s game or moving forward these next chain of games five, or are we looking at the macro perspective? What’s our advantage as an overall roster? And I think you got to keep an eye on those things.”

“If you have guys that are . . great crashing the offensive glass, you may want to crash more . . we’re not in this to just go to a certain score, we’re in this to net gain. So if my net gain is plus 12, on the offensive glass, and the transition defense, as a result of crashing gives up six, why wouldn’t we crash every single time? Just a quick glimpse at a stat sheet, doesn’t give the complete picture. If you give up 12 fastbreak points, but you get 22 second chance points, that’s a win. It’s a plus 10.”

“As you go further into the playoffs, each player who is on the floor must be able to contribute on both ends.”

“The core of the game is making reads and reading what is the advantage . . Can I attack that outside hip? Can I attack that front foot? . . understanding those intricacies is the next level read. It’s no longer just reading simple drop coverage by a big . . the elite guys are looking at the tertiary guys in the corners . . they’re looking at, ‘Is this guy here tagging? Is this guy nail helping over here?’ They’re looking at the next level of read. It takes a lot of experience and a lot of skill and a lot of development to get to that point.”

Mike Weinar Links from the Podcast: