In 2021-22, Randolph Macon won its first national championship with the largest margin of victory in NCAA DIII history. The team won a program best 33 games and capped a remarkable run of success for the program during Merkel’s time there. Merkel has made four trips to the NCAA tourney and has the most NCAA wins in program history. He has been ODAC Coach of the Year five times and was named the Glenn Robinson National Coach of the Year during the 2020-21 and 2021-22 season.

The program is 148-38 in Merkel’s seven seasons as head coach. He also engineered a 12-0 record during the 2020-21 campaign. Josh Merkel is the first coach or player to win one of CollegeInsider.com awards in consecutive seasons.

For the four seasons prior to his return to Randolph-Macon, Merkel served as head coach at Salisbury University. At Salisbury his teams went 66-41 (.617) over those four years and 37-25 (.597) in Capital Athletic Conference.

During the 2004-05 season, Merkel was a graduate assistant coach at West Virginia under head coach John Beilein. Merkel helped the Mountaineers reach the Elite Eight in the NCAA Tournament and earn a ranking as high as No. 12 in the national polls.

Merkel was an assistant coach for five seasons at Eastern Kentucky with head coach Jeff Neubauer. From 2006-10, the Colonels registered 73 victories, the highest four-season total in program history. EKU won the Ohio Valley Conference championship in 2007 and faced North Carolina in the NCAA Tournament. 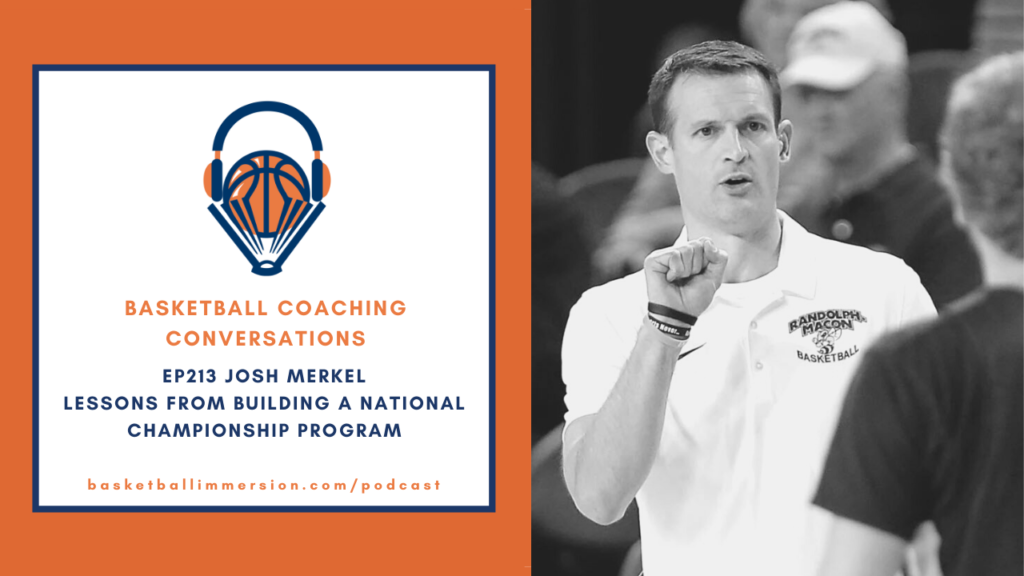 “[We’ve had] the continuity of great players who have been committed to the team and have been about development . .[and that] has really laid a foundation for our guys to step into see the standards . . and that’s helped me be better at my job.”

“I don’t think you have sustained success . . without being a group that’s hungry and focused and has the attention to detail.”

“We’ll have these huddles. It’s about two things: celebrate someone, but also tell us one thing you need to work on or tell us an observation. What did you notice today? We’re helping guys self-reflect.”

“If you don’t reflect on the mistake, it doesn’t mean you’re going to fix the mistake. Making the mistake is not going to fix it . . it’s that reflection that’s really going to help bring the awareness so you don’t do it again . . And so, we’re big on huddles and making guys talk and be accountable.”

“You’ve got to be connected to do anything at a high level, to do anything special, and it makes it more memorable and fun . . So, it’s not just what we do, but it’s going to be how we do it.”

“If you’re too worried about you, then it’s going to be hard to be connected. Tony Bennett does a great job talking about humility, and what it is – it’s not thinking less of yourself, it’s thinking more about others.”

“Do you want truth? Or do you want harmony? Every player, when you frame it, like that says ‘truth’ . . we’re giving them opportunities to practice it . . I think it’s something that you can cultivate in your program when you talk about it a lot. It empowers your older guys to speak truth to young guys about their habits and their work ethic and their work rate and maybe how they’re handling themselves off the court, whether it’s nutrition or treatments.”

“You want to be great at a few things . . I think that’s what constraints do. They allow you to narrow in and focus on one or two things that you’re doing within a drill because there’s a hundred things going on.”

“The feedback loop is huge. How do you handle the feedback loop? Both from players and coaches? And not just did you handle it, but do you seek it out? Do you embrace feedback? . . those are our kind of guys who are proactive about asking questions and being curious about their development and their game. We want to put them in an environment where the game does the teaching, or the game is the bad guy, or the drill is the bad guy versus me being the bad guy.”

“We define ball pressure . . it’s basically either making that guy put it on the floor, or making him turn his back.”

“Adversity is a requirement for growth. And we were in that developmental pit . . but with the right guys, the guys that you can lose with, we fought to get our way out of it.”

Josh Merkel Links from the Podcast: