Coach Korner has won multiple League and Cup Championships in Austria & Netherlands whilst also being awarded Coach of the Year honours throughout his career. Raoul has a proven track record of developing top players, building competitive winning teams and promotion to FIBA Champions League Top 16, FIBA EuroCup Final Four which was not played due to COVID19.

Raoul Korner is also Austrian Men’s National Team Head Coach competing in 2021 EuroBasket qualifiers in Group F with Slovenia, Ukraine and Hungary. Raoul is also a lecturer at University of Bayreuth (GER) about “Leadership” as well at several National and International Coaches Clinics. 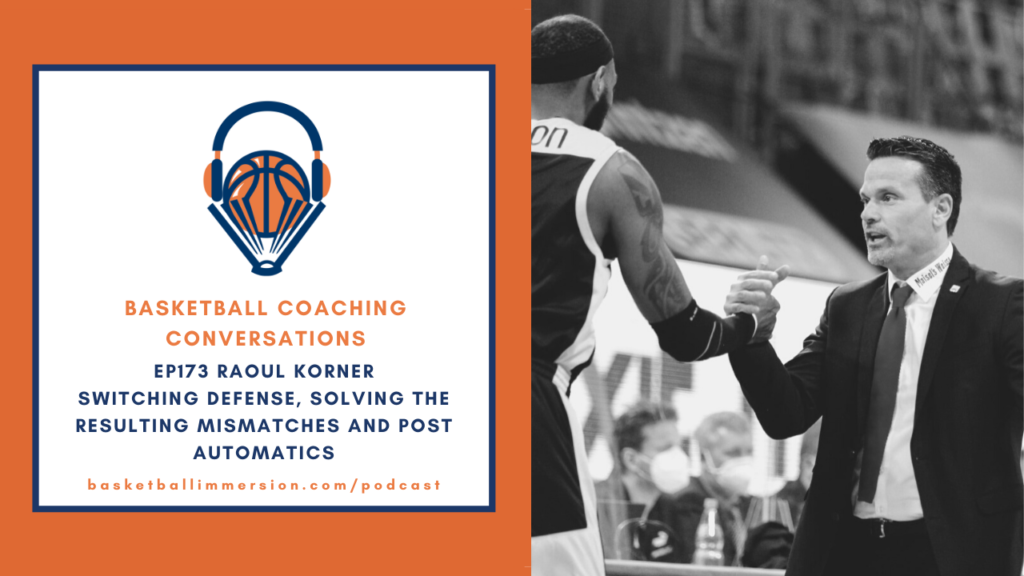 “I always had a clear vision of where I wanted to be. I value good situations . . But I also understand that if you want to take the next step, if you want to develop, you have to jump out of your comfort zone.”

“In all the successful teams I have coached, I found three things that those teams had in common. Number one, [was] a very high level of self discipline. So successful teams always had very self -disciplined players, you didn’t need too many rules . . Number two was very good team chemistry . . it’s much more fun to come to work and work with good people who you like to be around. And if everything is clicking, and guys are enjoying what they’re doing, then they can do this successfully. And the third thing . . is good internal leadership, having at least one player on the team who takes responsibility . . and who helps you to transfer your word into the locker room.”

“As soon as you have an advantage on offense, if you just have the correct spacing and good ball movement, eventually, it’s going to lead to a high percentage shot.”

“So, what are you trying to do with switching? First of all, you’re trying to to be aggressive and . . you’re trying to avoid helping in too much . . But one thing you’ve already achieved, you take away the ball movement from the offense. You force the offense to attack in certain areas and certain spots that you decide where you want them to attack because they only have two advantages – it’s the big against small or small against big.”

“The main rule for the big man is to be really aggressive. When you go out on the switch, it’s like a hard hedge. You take away this initial momentum because you don’t want the guard being able to attack the big downhill. That’s one of the most difficult things for big men to stop is if they’re attacked in a full speed situation by a guard so we want to still hedge out parallel to the sideline and hedge out aggressively.”

“I think that’s one of the most common mistakes – big men tend to roll right to the block. They should try to get open right under the basket, they shouldn’t need a dribble. Because if they need to dribble, they give the smaller guards a chance to collapse or even double team them. So they should try to get the position, get their arms up, try to seal the defender right behind them . . the mismatch pass always needs to be a high pass . . we don’t want any low passes against a switching defense.”

“The main focus on every offense . . is creating an advantage. You create your advantage once you manage to draw a second defender on the ball. And whenever this happens, the action starts.”

“A lot of times, where the problem starts, is you don’t create an advantage initially, because you’re executing sloppily.”

“Help is Plan B. Help is always Plan B. Plan A is stop your man. Because as soon as you need to rotate, you have potential mistakes. If you stop your man one on one, if you don’t need to help, that’s how it should be.”

“If you don’t have good spacing, you’re not going to create an advantage even if you set a good screen. But, if you have good spacing, all you need now is to move the ball and to move it quickly. And there I think the most difficult part is to convince the players of making the simple pass and not looking for the touchdown pass. You want to make the next open pass . . you want to keep the advantage . . you’re going to have different rules but the key thing is to get rid of the ball even though it’s not spectacular.”

“We’re giving the players a checklist, once they catch the ball inside, the first thing to look for is the quick move situation. So if you catch the ball inside the paint, we stay away from cutting and anything . . that could bring the defense towards the ball too much . . Number two, if you catch the ball in the post, and you don’t have the quick move, wait for the cutting edge . . I’m not a fan of robotic basketball, so I like to give the players an amount of options and give them the tools to solve the problems that the defense might throw at us.”

“In modern basketball, it’s really important to not give the players strict rules . . but to give them options and let them operate within the team structure. Let them be creative. Let them think the game . . You have a concept and you operate within this concept but . . you need to make reads to adjust to the defense.”

Raoul Korner Links from the Podcast: