In just his second season at the helm of the men’s basketball program, Holloway was named as the 2020 The Rock MAAC Coach of the Year. Holloway guided the Peacocks to an 18-12 overall record and 14-6 MAAC mark, good enough for a second-place finish, which was the best finish since 2016-17. Under his guidance, the team made the biggest NET Rankings improvement in the MAAC and 14th nationally from 2018-19 to 2019-20, improving by 105 spots. The 14 league wins under Holloway tied the program record for most conference victories in a season and the team’s nine MAAC home wins were the most ever by the program.

Prior to joining Seton Hall, Holloway served on Willard’s staff at Iona, where he helped turn the Gaels program around. Inheriting a team that went 2-28 in 2006-07, Holloway and Willard recruited and coached student-athletes to one of the greatest turnarounds in college basketball history as their 2009-10 team won 21 games to complete a 19-win turnaround in only the third year of the administration. During his original stint on the Seton Hall coaching staff, Holloway was an administrative assistant for head coach Bobby Gonzalez from 2006-07.

Holloway started his coaching career serving as an assistant coach at the high school level at Bloomfield Tech.

Holloway was a four-year standout at Seton Hall from 1996-00 and helped lead his team to the 2000 NCAA Sweet Sixteen, where he hit the game-winning layup in overtime to defeat Oregon in the NCAA first round. A 2012 inductee of the Seton Hall Athletics Hall of Fame, Holloway’s preeminent playing career landed him in the Seton Hall record books as the all-time assist leader with 681, 17th in scoring with 1,588 points, fourth in steals with 231 steals, and eighth with 185 three-pointers in 116 games. In 2000, he was named the BIG EAST’s Most Improved Player, while earning All-BIG EAST status three times and All-Metropolitan accolades in each of his four seasons at Seton Hall.

After his collegiate success, Holloway played professionally in England for the Chester Jets and London Towers as well as a season in Ulm, Germany and Istanbul, Turkey. Back in the U.S., he had stints with the Brooklyn Kings of the USBL and Newark, Las Vegas and Chicago in the ABA. He was invited to three preseason NBA camps with the Knicks, Nets and Golden State Warriors. 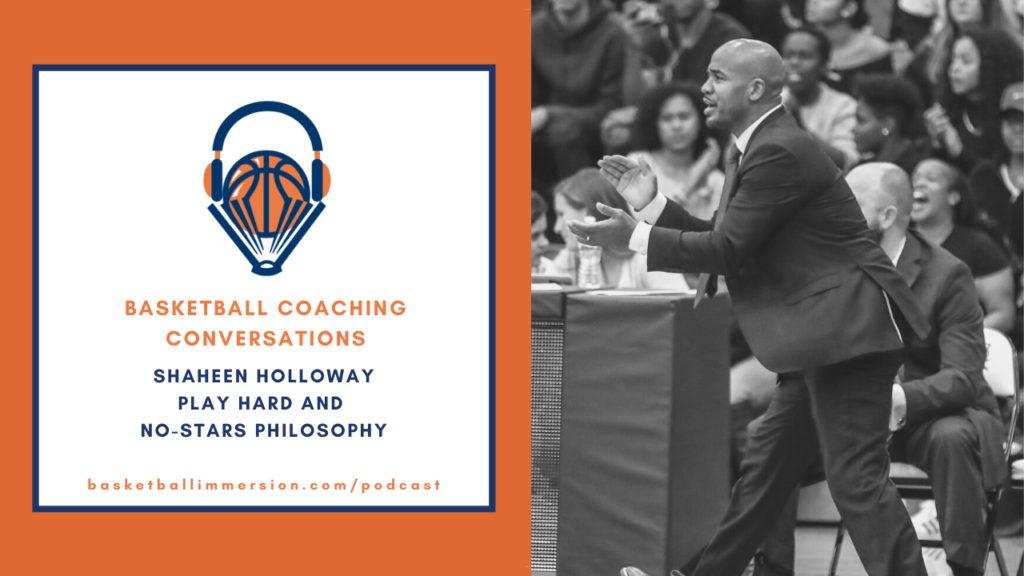 “My second year [at St. Peter’s] we had an unbelievable year, I was playing 12 guys double figure minutes . . when you do a scouting report on us, you have no idea who to focus on.”

“We play so hard on defense that you’re going to want to come out of the game. So guys understood that they were coming out and going back in . . and if you’re not giving me 110%, you’re coming out anyway.”

“I’m not afraid to coach a guy hard or coach a guy to what I feel like they need. I’m not telling guys what they want to hear all the time . .  I want to put my guys in spots for them to be successful.”

“Our team is built on defense . . we spend a lot of time on 1-on-1, 2-on-2, 3-on-3, because it also works offense, too . . you’ve got to work on how to get around people, how to read the defense. On the defense, you’re working on how to stay in front of people and move your feet, and beat people to a spot.”

“We were number one in five different defensive categories . . my guys take defense seriously because I make sure we do that. So when you’re going against those guys every day, you’ve got no other choice but to get better offensively as well.”

“I’ve got small guards; smaller guards get posted up. I want us to just wall up and not try to block a shot . . On defense, we either front or three quarter. Once they get it, you play behind them and you just want your hands up and kind of push with your stomach . . on a double team we teach . . not to go for fakes, just wall up, hands up, come together, and just be big.”

“When we come out of timeouts, I have a play sheet . . and each time it’s something different . . I  try to explore different matchups.”

“I watch a lot of film . . I look at my personnel every year. I don’t want to run the same plays . . because I have different personnel this year, I ran different stuff than last year.”

“I do my skill development based on how I think kids need to learn how to score . . when you do individual stuff, that’s just for them getting better . . my big guys will do the guard drills . . I like skilled guys . . my bigs, if they get the rebound, we allow them to push it . . when they push it . . they’ve got to learn how to make decisions . . I don’t put guys in a box.”

“I’m a basketball coach. I’m a father. I’m a big brother figure. I’m a mentor figure. I want to help you get better as a man and as a student and as a player.  That’s my job . . I was taught at a young age, you work hard, you keep your nose clean, you keep a low profile, and let your work do the talking. And that’s kind of what I’ve been doing.”

Shaheen Holloway Links from the Podcast: