In this week’s coaching conversation, coaching legend Lin Dunn joins the podcast to discuss ways to help you and your team reach their full potential.

Dunn was abruptly fired at Purdue after the 1995-96 season, but resurfaced in the pros with the American Basketball League’s Portland Power in 1996. She was ABL’s coach of the year in 1998, right before that league folded. Dunn then became the first coach and GM of the expansion Seattle Storm in the ABL’s rival, the WNBA. Her folksy southern personality was a hit in Urbane, Seattle, with fans often wearing Dunn masks and quoting her rustic aphorisms. The team started with a dismal 6-26 season.

Dunn left the Storm just as it was starting to have success. New superstars Lauren Jackson and Sue Bird led the team to the 2002 playoffs, where they were swept by the Los Angeles Sparks. Dunn then resigned, leaving the path open for Anne Donovan to build a championship team just two seasons later.

Dunn is a former head coach of the Indiana Fever. Dunn won the WNBA championship with the Fever on October 21, 2012.

On May 6, 2014, Dunn announced her retirement from coaching at the end of the year. On June 14, 2014; Dunn was inducted into the Women’s Basketball Hall of Fame. On May 24, 2016, she was introduced as an assistant coach for Matthew Mitchell at Kentucky. In 2018, her role at Kentucky changed to special assistant to the head coach. 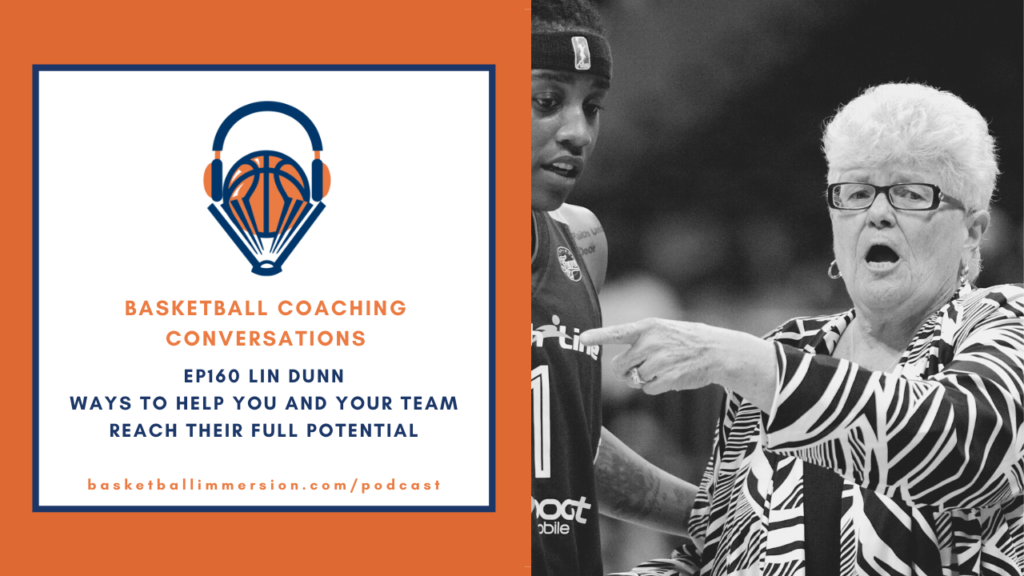 “There are a lot of key factors for reaching your potential but three, I think, are really, really important . . communicating clearly what the expectations are, what we’re going to do, and then how we’re going to do it.”

“Problems don’t go away on their own . . the last thing you want is to have a hangnail turn into a broken arm . . when you have any idea that there is an issue that’s growing that needs to be addressed, address it. Address it in a positive way but don’t hide it, don’t cover it up, don’t run from it.”

“Communicate expectations clearly, have the difficult conversations . . [those are] real keys to being able to reach your potential.And [the other] thing that’s a real key is providing immediate feedback.”

“I believe in immediate feedback during practice, and after practice . . I don’t want you to stop the drill 24/7 but if you allow your players to do repetitions incorrectly, then they’re not going to improve. So it’s your responsibility to know how to critique and correct without disrupting the whole practice.”

“There is nothing more important as a head coach than who you allow into your inner circle . . practice is where everything develops that makes you successful or not. So you better have some great teachers, if you can; and if you can’t, then at least hire somebody that’s a sponge that will learn how to be a great teacher.”

“Accountability is a key part of a strong, sustainable culture.”

“The consistently great coaches, in all sports, have mentors. They have a board of directors, the people that they turn to and say, ‘Hey, how am I doing?’”

“When you’re interviewing assistants, you’re saying, ‘Okay, tell me what you bring to the table. Tell me what you do well. Tell me how you can make me better and my team better.’”

“If your players know exactly what’s going to happen in every drill, they never have to make a decision. If there’s no surprise . . no adjustments, then how can they grow? How can their decision making grow? It’s really important the teaching part, the use of time in your drill, the multiple drill and then, of course, making it a decision making drill.”

“One of the areas that that I think sometimes is a special situation that might get overlooked, is when we’re behind and we’ve got to get a score quick. . so having a plan . . I think that’s worth spending some time on.”

“If we are skilled and we’re preparing for special situations, it’s gonna help us win the game . . It’s a sign that we’re well coached and we’re prepared . . I think the coaches and the teams that value it . . you can see it in how they execute.”

Lin Dunn Links from the Podcast: