Entering his third season with the Commodores, Jerry Stackhouse has made a noticeable impact in turning around the Vanderbilt program. In his first season, two Commodores were selected in the NBA Draft, including lottery pick Aaron Nesmith who was chosen 14th overall by the Boston Celtics, and junior guard Saben Lee who was picked 37th overall by the Detroit Pistons. Stackhouse’s creative offensive sets enabled Nesmith to lead the nation in 3-point field goals made and 3-point field goal percentage (before a foot injury sidelined him after 14 games) and propelled Lee to three 30-point games and a second-team All-SEC selection in 2019-20.

Most recently, Scotty Pippen Jr. earned All-SEC first team honors and set the school scoring record for a sophomore in 2020-21. He finished second in the SEC in scoring (20.8 points per game) and assists (4.9), while sophomore forward Dylan Disu led the SEC in rebounding (9.2) and was named the conference’s Scholar-Athlete of the Year.

Prior to taking the head coaching job in the G League, Stackhouse was an assistant coach for the Toronto Raptors during the 2015-16 season.

After playing for legendary head coach Dean Smith and earning Sports Illustrated Player of the Year, All-America first team and All-ACC honors at North Carolina, Stackhouse was selected by the Philadelphia 76ers with the third overall pick in the 1995 NBA Draft. He was named to the 1995-96 NBA All-Rookie first team after leading all first-year players in scoring (19.8 points).

In 2011, Stackhouse launched Stackhouse Elite, an AAU program based in Atlanta, Georgia. The program captured numerous titles in the 15U, 16U, and 17U divisions. 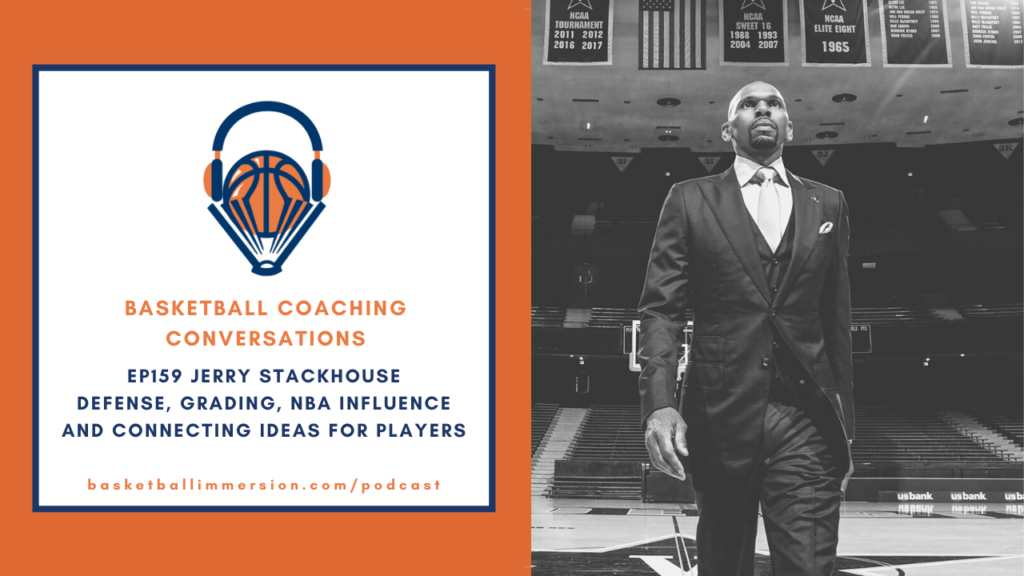 “Everybody wants to learn, everybody wants to get better. If you come with an approach of how to teach them . . that’s the key . . guys learn in different ways. Some guys you can just tell them; some guys, you have to show them . . on the screen; and some guys you literally have to go and move them to different spots and then they get a better feel of where they’re supposed to be on the floor.”

“If you want to get a chance to have the freedom that you want offensively, you’ve got to show me that you can do it on the defensive end. I think that’s just a staple of winning.”

“A lot of young players . . and even pro players . . [struggle with defensive] fundamentals . . it’s really important that you see the ball early in transition.”

“A lot of teams that run chin action . . you want to get to their bodies and war them off of those rip screens and back screens. Other teams that don’t run those types of actions, you want to be in a gap.”

“That’s what we try to do as far as development with our guys . . hopefully, once you leave here, you know that you can go play anywhere. I can go on the court because I understand the game and how to defend actions and principles of seeing man and ball. Those things don’t come naturally, sometimes you’ve got to drill them.”

“Maybe you have 60 possessions. And if you get half of those perfect, what I call the perfect defensive possession where everybody did everything right, we boxed out, we got a stop, sometimes they score. You can play really good defense and they score so we just mark that check score. So out of those 60 possessions . . if we get at least 40% of those [perfect] there’s normally a good chance that we get a win; 50%, a really good chance that we get a win; 60%, we’re winning the game.”

“50% [perfect defensive possessions] is a great chance [that we’re winning the game]. We’re still getting it wrong 50% of the time. Defense is a game of mistakes. So it’s not like we’re expecting perfection, but we want to strive for it . . and a lot of times, we can make up for it with multiple efforts.”

“There’s only two ways to do things: the right way and again. When we do it again . . the proof is in the pudding. We were where we were supposed to be, we did things we were supposed to do, we got stops, and we got out and we were able to run . . When we don’t do those things, bad things happen . . It is matter of fact: do your job, be accountable, and the results speak for themselves.”

“I think offensive rebounding percentage is a huge number when it comes to winning . . you get 30 to 35% of shots that you missed, you’re going to win a lot of games.”

“This new generation, these kids are in tune . . they still need to be taught . . and they still make mistakes, and we’ve got to give them a blueprint of how to be successful and how to be tactful in how they approach things, but they’re extremely smart . . I don’t take that [teaching the game] lightly. I don’t take it for granted, I make sure that we hit all three different angles of learning, so that we give all of our guys a chance to be successful and have a great understanding of how we approach and how we do things.”

Jerry Stackhouse Links from the Podcast: