During his first year on the sidelines at FIU, Ballard guided the Panthers to a 20-14 record and a 10-8 mark in Conference USA (C-USA) play. The team’s 20 wins marked just the third time in school history that FIU logged 20-or-more victories and were tied for the second most in a single season, while the 10 C-USA wins was the most since joining the conference. In addition, the Panthers advanced to only their second postseason tournament in program history taking part in the Collegeinsider.com Tournament (CIT) and advancing to the second round. During the first round of the CIT, the Blue and Gold won their first-ever postseason tournament game with an 87-81 victory at Texas State.

As a team, the Panthers set several single-season school records, including points (2,798), rebounds (1,218), assists (491) and steals (359), led the nation in steals-per-game (10.6), turnover margin (5.6) and turnovers forced (19.6), and was second in total steals. Because of the Panthers’ efforts, Ballard was named a finalist for the Joe B. Hall National Coach of the Year Award, given to America’s top first year head coach in Division I, and the Ben Jobe Award, presented to the top minority coach in Division I.

Ballard’s winning ways continued during the 2019-20 season when the Panthers went 19-13 before the remainder of the season was cancelled to the COVID-19 outbreak.The FIU squad led the nation in blocked shots (210) and swats per contest (6.6) during the 2019-20 campaign. The team also ranked 11th in three-point defense (28.8) and total steals (280). The Panthers 8.8 steals per game ranked 13th nationally.

“It’s a mentality we’re trying to get them to embrace. It’s an effort level in which they have to put forth that we have to get them to understand. So we’re definitely okay with some fouling and maybe some overzealousness to begin with, so that we can create that mentality.”

“When you press a lot as a team. . you really have to set up scenarios to work on your half court offense because you’re playing from having broken a press or attacked or press so much that what we’re not doing is getting across half court and then pulling it out and running a play.”

“We don’t want anyone to hold the ball, we just want to get to flowing into our offense. So for us to work on our quick hitting ball screen sets that begin our half court possessions, we almost have to set up a specific drill for that, because when we’re just playing and pressing, those opportunities don’t present themselves very often.”

“I have to be a little bit more thoughtful, a little bit more planning to make sure we’re getting those reps in the half court both on the offensive and defensive end. But again . . we need to be able to play beyond our half court set regardless. So the more opportunities that our guys get to flow and play organically, the better.”

“One of our biggest emphasis is spacing. And then the biggest thing for us, if if our offense is humming, generally is because we’re setting really good ball screens.”

“For us, setting a really good ball screen is a little bit different than what I think the idea of a traditional ball screen is . . what we want our screener to do is screen what we call the back pocket of his defender. His entire goal as a screener is to make the guy that’s guarding the ball go over top of that screen. And when he’s done that, he’s done his job and we want him sprint rolling to the rim and then we’re playing off of that.”

“We made huge strides from year one to year two, in terms of the consistency of our of our screening. And it helped tremendously in terms of our efficiency, shooting the ball, our effective field goal percentage . . those all took major jumps and it was because of [our screening].”

“When you don’t have great spacing in the college game, you’re just inviting more and more traffic in the paint and it just makes the degree of difficulty of reads for the ball handler so much [harder].”

“I think there’s a cumulative effect to our press that there’s some point throughout the game where, maybe [the opposing team] they’re a little fatigued or maybe . . has a lapse in concentration and it can lead to us having an eight or nine point run that can hopefully change the tide of the game.”

“I would say for a year and a half, we didn’t post up our bigs at all. And we didn’t do a ton of off-ball screening . . I would say those are two things that we are not doing as much. And I’m okay with that, I’m more concerned with trying to space the defense out and simplify the reads for our guys, so that they can go out there and play and be free.”

“We’re not trying to set as many ball screens as we can on the possession. If we can score on the first ball screen that we set, then that’s what we want to do. And I think that’s part of what makes our second and third ball screens effective.”

“We switch screens, both on and off the ball at every position throughout the entirety of the game. And if you think about it, it kind of makes sense that we would have been good at defending the three point line.”

“Open shots beat you more than bad matchups do so, at this level, let’s let’s try to prevent as many open shots as we can. The college game allows us, if you get a bad matchup . . you can load up as much as you want.”

“One of the things that can happen when you’re a switching team, especially off the ball, is that you can become a little bit man-conscious . . meaning that you’re creeping more towards your man because you’re more concerned about switching these screens off the ball than you are . . pulling towards the ball and having good off the ball positioning.” 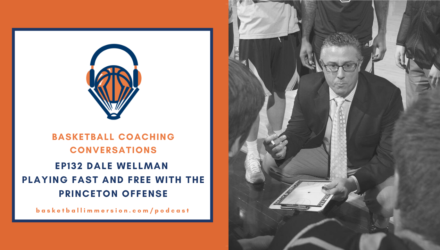 In this week’s basketball coaching conversation, mindset and relationship