In this week’s basketball coaching conversation, mindset and relationship expert Dr. Shyamala Kiru and Army assistant coach Zak Boisvert join the Basketball Podcast to openly discuss coaching with anger. Chris and Zak dive deep into our emotions to share their challenges with their emotions, and Shyamala provides insights and solutions to move beyond coaching with anger.

Dr. Shyamala is a Clinically-trained Leadership & Relationship Coach, and has spent the last 2 decades helping people master their emotional intelligence. Her mission is to help women build High Performance Relationships, in every area of their life. She is the founder of The EQ Code, a high-touch coaching program designed to help high performers transform the way they think, communicate and lead. Shyamala is also the founder of the Kiru Wellness Clinic, a mental health practice dedicated to the entire family system. She spent several years on the Board of Directors for the Ontario Association for Marriage & Family Therapy.

As a speaker, Shyamala provides frequent talks and workshops on a local, national and international scale. Shyamala is a media expert, having appeared on a national television show for nearly a decade and makes guest appearances on CTV, CP24 as well as frequent pieces of print media.

Zak Boisvert enters his fifth year with the program after arriving at Army West Point in October 2016. Boisvert also runs popular YouTube and a website called Pick and Pop that both share basketball and coaching knowledge.

Since joining Army, Boisvert has helped the program experience tremendous success against service academy rivals Navy and Air Force. The Black Knights are 5-3 against the Midshipmen and 3-1 opposite the Falcons since Boisvert joined the program as an assistant coach. With Boisvert on the staff, the Class of 2020 graduated with the most wins opposite Navy in program history.

Boisvert, a Portland, Maine, native, arrived at West Point after two years at University of Maine. While at Maine, Boisvert saw the Black Bears win total jump from three in his first season to eight wins in his second. Boisvert was tabbed by Maine head coach Bob Walsh as the program’s “Offensive Coordinator.” The Black Bears quickly upped the pace, raising their scoring average from 60.4 points per game to 76.6. The 16.2 increase in points per game marked the largest season-to-season scoring jump in Division I between the two seasons.

Prior to Maine, Boisvert gathered three years of collegiate coaching experience at Iona and Fairleigh Dickinson. As a member of the Knights, Boisvert helped FDU to its first conference tournament appearance in four years. Fairleigh Dickinson won six conference games during Boisvert’s lone season in Teaneck, matching the program’s total from the previous three years combined.

Shyamala: “My specialty is in working with people systemically. And what that means is whether I work with an individual or I work with a couple or I work with a leadership team, what I get really interested in is the interplay between the relationships.”

Shyamala: “I shared in my response to how impressed I was that the idea of emotion regulation, the idea of leading with integrity, the idea of actually having authentic impact with our teams is something that’s coming to the forefront in sports. I think that is so important. And I couldn’t be more proud to be part of this conversation.”

Shyamala: “If we think about anger . . and frustration for that matter, it’s almost like a blanket that covers up other emotions that we don’t want people to see . . if we think of anger as a secondary emotion . . what lies underneath that blanket are primary emotions. . and those primary emotions are in defense of our ego, right? So things like fear, anxiety, inferiority, inadequacy. . lie underneath that blanket of anger and frustration. And for the most part, people never have the opportunity to address those primary emotions, they never have an opportunity to process them.”

Zak: “I think that shift is dramatic. And that shift is in all parts of leadership, it’s in coaching, it’s in business leadership, you’re seeing a more empathetic way of looking at it and asking, ‘How does it feel to be led by me? How does it feel to be coached by me?’ There’s also a certain point, when you’re talking about the effectiveness or whether it worked or not, you have to understand a motivation by fear, there’s such a shelf life on that.”

Shyamala: “Emotional regulation is a skilled practice . . So emotion regulation starts way before we’re in the middle of a game.”

Shyamala: “The foundation [of emotional intelligence] is you don’t just do it in the game . . you must, I believe, as a leader today, have a daily practice . . that invites emotional awareness and that invites self regulation; and you need to be practicing it in every relationship possible . . This is a practice you need to truly be practicing in every moment that you can.”

Shyamala: “It’s far less rewarding to do anything from a place of ‘I’ve got the power, and I’m going to hang on to that,’ right? When we lead from a position of ‘I have the power’, we also feel like we need to hang on to the power. And we need to have all the answers and we can’t get it wrong. And it’s not okay for us to make a mistake”

Shyamala: “Self-talk can’t simply be an affirmation that I give you. It can’t, it’s not going to work because you’re not going to buy it . . your self talk in that moment has to come from a place where it is challenging your negative self talk.”

Shyamala: “Once you’re super clear on that [your underlying emotional response], then we can begin to develop a healthier self talk that you can actually use in that moment, that’s going to stick. Here’s the thing with self talk, it doesn’t stick right away . . it takes anywhere between 62 to 90 days to rewire your brain to a new way of thinking.”

Zak: “People have their faults, and they’re coaching people . . I’m imprinting my faults on these people. And it inspired me to say, ‘There’s got to be a better way.’ . . that’s the scary part of it. Because the way I coach, frankly, is a lot of the way I was coached.. it’s how I was raised.”

Shyamala: “One of the things I like to do, and I encourage a lot of the people that I work with to do is . . leading with value, our personal values . . When we lead with personal values, I think it is so much easier to make choices in integrity.”

Shyamala: “And I like the idea of having that conversation . . naming and identifying I’m having this conversation with you, as a human being and as a coach. Because in that you are immediately giving context to the fact that our relationship is not just a work relationship. It is not just coach to team member, it is also human to human.”

Zak: “I think sometimes as coaches one thing that I think is dangerous, is we act like that player was a blank canvas . . I need to respect that he’s coming with 15 years of playing experience and 19 years of life experience and he’s gonna have emotions . . wants . . desires.”

Shyamala: “It takes a great deal of vulnerability, I think, to say, ‘You guys mean a lot to me. This sport means a lot to me; this role is something I cherish.’ And I imagine, most good coaches feel that way. Right? They cherish that role, it is a strong part of your identity.”

Shyamala: “From a psychological perspective, it is a total lie to tell yourself that you have control over an outcome. It’s just not true. We can influence outcomes, right? But we can’t control outcomes. And I think part of what robs us of joy, being grounded, being content is trying to control outcomes.”

Shyamala: “One of the most powerful ways that we can remain connected to our piece of the puzzle . . is to make it visual. So what we know from a psychological perspective is that . . if we if we create a visual that represents our goals, or our values . . and we actually look at that visual, and we take it in, in a mindful way . . almost like meditate on that visual, on a daily basis, we are 80% more likely to achieve that goal, versus if we don’t.”

Shyamala: “I don’t think you can go wrong when you lead with compassion and integrity and value.” 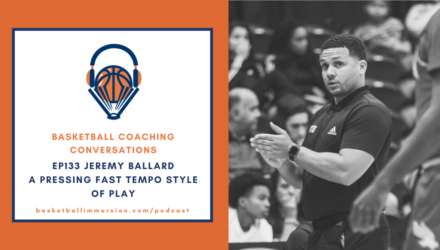