His journey has taken him around the world (Spain, Italy and Germany) and allowed him the unique opportunity to live in multiple cultures as well as learn as a player from some of the best coaches, Phil Jackson, Don Nelson, Mike Brown, Mike Malone, Terry Stotts, Tex Winters and his father George Karl. He has also been a teammate to some great players, Kobe Bryant, Derek Fisher, Pau Gasol, Lamar Odom, Stephen Curry, Lebron James, Carmelo Anthony and Shaquille O’Neal.

Coby Karl played in the NBA with the Los Angeles Lakers, Cleveland Cavaliers, Golden State Warriors, Denver Nuggets and was in training camp with the Portland Trailblazers. As a G-League (D-League) player, he spent time with the Los Angeles D-Fenders, Idaho Stampede (now the Salt Lake City Stars) and the Reno Big Horns (now the Stockton Kings). He has also played extensively overseas for teams like Armani Jeans Milano and MHP Riesen Ludwigsburg.

Coby Karl is now using these experiences to help others as a coach and professional speaker. The former guard erved as an assistant coach on the Westchester Knicks staff during the 2015-16 season at the conclusion of his playing career, helping the Knicks to earn their first playoff berth in franchise history as the team improved from 10-40 in 2014-15 to 28-22 just a year later. 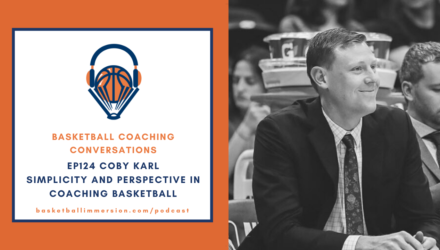 “My core memories were being in coaches meetings, seeing them set up practice, talking about philosophy and execution of different drills . . so I had a reverse way of seeing the game . . and that definitely gave me a different view . . and also a different perspective as a player.”

“Everyone wants to play fast but you . . put in plays from Day One. If you really want to play fast, don’t put any plays in for the first three days of practice.”

“I mainly want to teach our guys how to understand spacing in terms of getting away from the basketball, giving gaps available to the ball handler to penetrate, mostly in transition situations.”

“I found you could get better opportunities by just playing with a little pace or energy and attacking a gap, creating a disadvantage situation for the defense, and then just playing off that disadvantage.”

“We play a lot of 3-on-3, 4-on-4 with no screen and rolls, no plays, just drive and kick situations . . bring two defenders to you and then move it to the open man.”

“We work a lot on making quick decisions, reading the defense before the ball comes to you . . you’ve got to be ready to shoot the ball or put it on the floor depending on your skill set.”

“The first option, and I think we over complicate it a little bit as coaches, is just go get a lay-up.”

“I asked our assistants to limit . . their [the players’] decision making time . . putting a parameter on when it’s too slow . . we don’t want a jab, we don’t want an up-fake, we want them to be ready when the ball hits their hands or even before.”

“What we see is when we give them a lot of reps with limiting their time to make decisions, they’ll start to trust their decision making.”

“Reading a 1-on-1 situation against a drop or pick and roll or a help situation . . the biggest difficulty I see with young players is that they don’t slow down.”

“All the great point guards do it, all the great decision makers do it, they slow themselves down to give themselves more time to read the situation. . and again, they’re not thinking but they’re just reading . . Once you get them to understand that, it’s a very impactful thing and it gives them that courage that, ‘I can control this game.’”

“Simplicity and space create creativity and the beauty and unpredictability of randomness.”

“It’s really hard to scout for a team that doesn’t run any plays . . we give them actions . . all we’re trying to do is create a situation where the defense is at a disadvantage and then we’ve got to make the right play after that.”

“The one thing I like about the pistol . . there’s so many decisions . . and I think where I’ve seen coaches who try to run pistol go wrong is they make it a play. I think you should show your players options out of it . . I would prefer [the players] make the read themselves.”

“When I have been seen, where someone can actually see who I am as a human being, it empowers me to be more than I am in that moment. And I want our players to feel seen and feel loved and feel appreciated and understood and feel invested in by our organization and our staff.”

“The greatest teams are the ones that have that ability to bring all these individuals from different backgrounds and make them part of something bigger than themselves.”