Lessons from Coaching at an International Basketball Tournament

In this blog Mark Jablonski outlines his experiences and lessons learned from participating in an international basketball tournament. Mark participated as a part of 3D Global Sports International Development Coaching Program.

As part of the coaching staff for the 40th Jones Cup Tournament in Taiwan, I was fortunate to get the chance to observe as we prepared and coached during this international basketball tournament.  Coaches Chris Oliver and Brad Campbell shared similar philosophies about the game but, more importantly, came into the process open to sharing ideas and communicating freely with both players and coaches.

The 3D Global Sports Canadian team put together for this tournament had a limited amount of practice time together and faced a tough schedule of 8 games in 9 days against pro-level competition.

Here are some takeaways and lessons learned from this international basketball experience . . .

With only a few days to prepare, it was essential that coaches had a clear idea of how they wanted the team to play, what they would emphasize and where they could make the most impact.

In the preparation phase, the emphasis was on giving the team a basic structure for transition and a few basic offensive sets.  The majority of the practice time was spent on working through the offense with defensive pressure.  Incorporating the defense while learning and running the basic sets helped introduce some basic defensive concepts as the team worked on the more challenging aspects of spacing and movement on offense.

The offensive sets introduced had some key elements in common.  Each set had a basic action, variations and counters off the basic action and sets were used that could be implemented versus both man-to-man and zone defenses.

On defense, the coaches made a point of outlining some specific offensive actions they thought they might see, and detailing how players would defend against those actions. This gave the players a template for both specific defensive situations, as well as a vision of what would be the team’s overall defensive approach.

Coach Oliver also gave the players a broad overview of how we planned to win games with the three basic keys being offensive rebounding, transition and a disruptive defense.

Lesson:  Know your personnel and connect with your players

Before, during and after the first practice the coaches made it a point to ask questions of each of the players to help accelerate relationship-building between coaches and players. One of the important goals of these one-on-one conversations was to learn more about how the players saw their own strengths.

Some of the questions the coaches asked of players:

In addition to their own observations, these interactions helped establish that the players’ opinions were valued, encouraged leadership among the players, helped focus player’s attention on the task at hand and built the foundation for further conversations and communication throughout the tournament.

Coach Oliver also used the first practice to establish a bigger reason for the players to maintain a high standard of focus and effort.  He asked each player to think about who and what they were representing (themselves, their families, their country, the tournament promoter, etc.) and how they wanted to represent themselves.  The key questions were:  “How do you want to represent yourself?” and “What does that look like?”  The discussion of these themes would serve to bring the players together and would serve as a reminder of our larger goals throughout the tournament.

One notable advantage was the coaching staff’s ability to identify and implement in-game adjustments.

Most of the teams in the tournament were well-drilled and most had been together longer than the Canadian team.  As a result, set offenses for the other teams were more varied and more developed than that of the Canadian team.

As a result, a key separator in games was the ability to identify what was working for the other team and to adjust the defense to control a particular player or action.

On offense, in-game adjustments usually involved getting the ball to a matchup from our team who was having a particularly good game. It also involved engineering sets to attack a particular mismatch.

This ability to identify and put players in the best situation during the game speaks to the value of using a basic offensive framework that allowed for multiple attack options and diverse player positioning. The basic framework, especially the two-side spacing template, allowed for easy ATO and play counters to be implemented because the spacing was first and foremost being accounted for.

As most coaches will tell you, the science of the game is in the Xs and Os. Part of the art of coaching is how you, as a coach, handle diverse personalities in a dynamic team environment.

Perhaps it was a combined 35+ years of experience between the head coach and the lead assistant, but the handling of a diverse group of highly competitive and, at times challenging personalities, was pretty close to pitch perfect.

Because of the exposure the tournament offered, there was a significant incentive for players to play and attempt to showcase their own talents at the expense of the team.

In addition, an active nightlife scene, an enthusiastic basketball fan base and the transient nature of the team being together for a short, but intense, road trip meant there were plenty of outside distractions for the players.

One key thing coaches can do: recognize the usefulness of having a player-led team.  One of the first messages Coach Oliver shared with the team was that this team would be player led. Encouraging and empowering players to influence other players was a key to our success.

To communicate with players, all communication options were used. The coaches used team talks, one-on-one coach to player and teammate to teammates conversations, plus texts, group chats, and video to build an identity and belief in each other.

Learn more about coaching international basketball from the Basketball Podcast:

Lesson: What is, and what is not important?

A major sub-text throughout the tournament was to discern what to attune to as a coach, and what to selectively ignore.

Among the factors which impacted a coach’s ability to control situations and behavior were:

Coaching points to be made (some general, some specific to the particular tournament situation):

Mark Jablonski is a former Division 1 collegiate basketball player from the University of Pennsylvania and was part of Penn’s run to the NCAA Tournament Sweet Sixteen. He also holds a Certificate in Basketball Analytics from Sports Management Worldwide and has established a successful basketball player development practice based in New York City, working extensively with Coach Oliver at Breakthrough Basketball camps around North America. 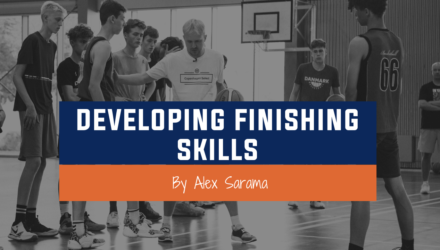