Best of the Basketball Podcast 2019 Part 1

The end of the year is a good time to look back with gratitude for all the Basketball Podcast guests who took the time to share their insights and views on the game. Considering the amount of information shared I have broken down this post into Part 1 and Part 2.

To all of the coaches who were guests on the Basketball Podcast:  Thank you for helping us raise our game and become better coaches and better people as a result of the wisdom and experience you shared.  Your generosity in sharing your time and passion for the game is a great example of sharing the game.

In that spirit, I’ve compiled a list of my favorite ideas from the Basketball Podcast in 2019. These ideas are broken down into a variety of categories.  If they pique your curiosity or desire to learn more, I urge you to use the link to each of the coaches to listen to the full podcast if you haven’t listened yet.  It’s been an amazing year of guests and there is a tremendous amount of knowledge shared.

Vance Walberg – “On our scouting report we always check does 5 . . look to take charges? If they do, we know our 5 man is going to get a lot of lobs.”

Dave Smart – Q: What are the weaknesses that you look for in a player?

A: The first thing is ‘Where do they struggle to pass from?’ If you can’t pass at a high level, you can’t play.

Zico Coronel – “A lot of offense is just trying to override their communications systems. Can we do things more quickly than they can communicate it and stay organized? Then we get a disorganized defense to attack and break down.”

Kelvin Sampson – “When you run a spacing offense, you can have weakside movement . . but whatever action you do, you still have to wind up in the slot and in the corner. You can’t come to the ball . . it just kills spacing.”

Click here to join 1000’s of coaches in our community

Top Impactful Formulations – Sometimes the genius is not in what you say but how you say it.  Anytime you can find a way to say something with more power and impact, I believe you raise the effectiveness of your coaching.

Hanno Mottola – “We came up with a saying, ‘Every day is a game day.’ If you approach every [practice] as if it’s a game day, I think players are going to enjoy that.”

Brendan Suhr – “Our job [as coaches] is to take the players where they can’t take themselves.”

Vance Walberg – “The only time I want you to dribble is when you think you can beat your guy. If you can’t, you pass, you cut.”

Matt Painter – “Guys that have that mental toughness and that discipline, they’re really just doing simple, fundamental things over and over and over again.”

Ryan Odom – “Young guys come in with a definition of ‘I’m playing hard, Coach.’ Well . . you are for you, but not for us. So we’ve got to get you to that point.”

Bruce Weber – “Do not go to war with one bullet . . If you’re going to guard guard a ball screen a certain way . . and they’re cooking you, are you going to change? . . You have a second . . or even a third bullet.”

Zico Coronel – “We want to spend as little time as possible between those high efficiency scoring zones [at the rim and at the 3-point line] . . so we want to get from three to rim as quickly as possible and from rim back out to create the space for the next person’s opportunity.”

Cody Toppert – “We want to assault the paint. We want rim, we’ll settle for paint. And from there we’ve got to have finishing solutions or passing solutions . . that is going to result in us getting a high value shot.”

Eric Musselman –“I always tell the players, ‘I don’t define the roles.  You define the roles in the off-season.’ . . I do think roles evolve during the course of the season.”

Mike Sotsky – “I think it’s become . . even more important with this generation . . of shouting praise and whispering criticism . . and finding the right way to teach . . and get those lessons across.”

Chris Holtmann – “My college coach called it ‘the monotony of excellence’ . . this idea of do your work consistently on a day-to-day basis as well as you can and, ultimately, you’ll get what you’ve earned and you’ll be ready for the next step.”

Gail Goestenkors – “You have to re-recruit your players daily.”

Kip Ioane – “You know damn well when your teammate has probably had too much [alcohol] . . you know . . where this might lead. That’s where you have to help. You have got to rotate over.” [Just a great way of connecting lessons on and off the court for your players.]

Nicki Collen – “We take the approach of ‘basket next’ any time we’re in rotation . . we’re always protecting the rim and playing out.”

Chris Oliver – “Keep and add.  Keep the head fake and get better at speed.” [This has become my go-to phrasing for correcting players.  Great way to make every correction have a positive impact. I think it also helps to keep guys from tuning out corrections because of the way you preface the correction.]

Zico Coronel – “I think you want to know how well it [coaching] is transferring preemptively; last year we used Kahoot an online game where you can build your own quizzes . . to probe the understanding of the scout.”

Kelvin Sampson – “Choose what you want to be good at and be consistent with it. You can’t do everything every day but you can do some things every day. And those ‘somethings’ that you do every day is what your team’s going to be good at.”

Most Thought Provoking Statements or Views

T.J. Saint – “Any shot outside of the lane, I would never jump at because . . what you do see a lot is getting lifted by the shot fake and then rewarding them with two free throws.” [I find this has helped our defense in a number of ways – defensive rebounding, cutting down on fouls, fewer defensive rotations.]

Pascal Meurs – “I really dislike a stationary start to a drill . . it kills every intensity of the drill and, on top of that, it’s not game-like. I really want to have a dynamic start.”

Will Weaver – “The biggest learning for me, the one that I was the least prepared for . . was how much having the head coaching role requires . . being able to ignore stuff.”

Will Voigt – [On 4-man defensive shell drill] “The reality is, if you think . . about any defensive scheme, you want your big to be the rotational help on penetration most of the time. So to remove that from the equation and practice that repeatedly just doesn’t make a whole lot of sense to me.”

Jay Triano – “Being involved in social media . . has helped me as a coach.”

Jimmy Tillette – “You’re at the end of cerebral play in college. Anything below 30 seconds is going to turn into the NBA and those coaches who were at the best schools athletically wanted to do that anyway.”

Jota Cuspinera – “Offense has to react to the reaction of the defender who can . . move . . it’s not a cone, a cone doesn’t move . . We don’t play against empty spaces, we’ve got to create empty spaces when we are playing.”

Dave Smart – “I get very upset when there is not positive or negative reinforcement after every possession in practice . . the leaders on the team . . are expected to care after every single possession. Good or bad they need to care.”

Fran Frachilla – “At the end of every season, we sat down as a coaching staff and went through the practice plans of the 110 or 120 practices we had and dissected what drills worked, what didn’t work, what was the timing of drills . . what drills correlated to how we really played.”

Lessons I Forgot During the Year

Bryan Gates – “You can’t do passing drills enough at any level . . The Utah Jazz pass the ball 360 times a game. If you’re going to do something that amount of times, you may want to work on it once in awhile.”

Randy Brown – “How much time this week did you work on breaking down your skill of communication as a team? . . We teach shooting, we teach defensive transition, are we teaching communication?”

Hanno Mottola – “You deny but you don’t turn your whole back to the ball . . steals don’t come by stealing, they come from positioning . . we want to disrupt the movement of the ball.”

Igor Milicic – “Usually we are trying to feel how a team responds to a zone press after a free throw . . if they give us an opportunity to steal the ball we go for it but we want to steal time.”

“We are stealing time from opponents [so they have] less time to attack us.”

Dave Smart – “When we go into games, we don’t spend a lot of time on what people run . . but we’re really all about how we cover each individual.”

Kelvin Sampson – “We work on winning the first dribble, we work on taking away the strong hand and we make sure you know whether you are the helper . . the one person who cannot get beat defensively is the helper.”

Nicki Collen – “Players have tendencies . . in our league with 12 teams . . those tendencies are a lot easier to coach and understand from a defensive perspective . . We’re very tendency-based in terms of our help.”

David Arseneault, Jr. – “One statistic I took the most out of when I was in the G-league was the percentage we shot off of inside out threes versus the dribble or lateral pass threes.”

Cody Toppert – “There’s not one, single team in the NBA that shoots and scores at an offensive efficiency rating that is higher the longer they have the ball.”

Ettore Messina – “Defensively, if you can take away the transition points and the second chance points, theoretically, it’s very hard for any team, including the Raptors or the Warriors, to score more than 80-85 points.”

Brian Adams – “An area I really want to up this year is help defense – the ability to shrink and pack the paint . . The top eight defensive teams were all top eight in least amount of points allowed in the paint.”

Best of, Coaching, The Basketball Podcast 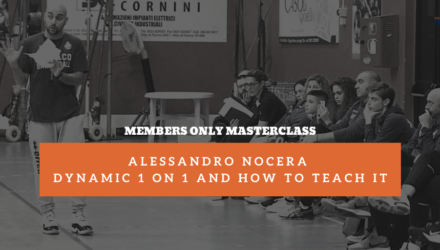 Italian U15 National Team Head Coach Alessandro Nocera presents on dynamic 1-on-1 and how to teach it. Alessandro is regarded as one of the top youth coaches

Masterclass with Alessandro No...

How to Shoot the Basketball Us...

One of the main teaching