The danger with build up drills is that they are often very blocked and scripted. This means that mental effort is not heightened and players essentially learn to memorize the drill, and complete it mindlessly because there is no novel stimuli or challenge.

Developing fundamental basketball skills by adding BDT shooting to build up drills creates novel repetitions each repetition for a player. On each repetition a player must think because a decision about whether to shoot, pass, drive or move are cued by an active participant in the learning process. Instead of being blocked and mindless, a player is faced with random and mindful applications of skills.

This is an often misconstrued idea that BDT training sacrifices fundamental skill development. The fact is that BDT shooting is first, and foremost, a footwork drill. Every physical execution of a decision in basketball starts from the feet. Once the perception and decision have been made, the feet, execute the skill application.

In a shooting example, we refer to this as “fighting for your feet.” We want players to as quickly as possible, with whatever footwork you believe in as a coach, get their feet in a position where they can shoot, drive, pass or move. After the footwork gets applied, BDT shooting emphasizes the application of shooting, dribbling, passing and movement skills just like any other shooting drill. The difference is all these fundamental skill applications are preceded on every repetition by a novel, unscripted perception and decision.

Not sure what BDT is? Check out these two blogs:

Learn How to Use Basketball Decision Training

BDT shooting is in fact a part of a bigger build of to small-sided games, and competitive play, as it bridges the gap between on-air practice, and practicing offense vs. defense. I wanted to share an example from the Acadia University women’s basketball team of building up BDT shooting drills. The best part about sharing has been that what I have shared gets both adopted, and adapted. Since I widely shared the BDT shooting concept with coaches a few years back, there have been many coaches who adopted and adapted the concept.

Head coach, Len Harvey, and his team adopted, and adapted BDT into some build up shooting drills that highlight how BDT can be used in your practices and skill development workouts. In his four years at Acadia, Coach Harvey has had great success, having won his conference and played in the national final eight tournament two times.

How does Acadia women’s basketball use BDT?

They start with two player BDT. Acadia starts with a progression from two players stationary, to two players moving, which is common to most teams that use BDT. What is different is that they build it up to three and four player BDT.

It is important to note that they don’t do the same thing every day. Even though they use the term build up to describe these drills, some days they follow the natural progression from two, to three, to four, and some days they jump to the end, or stay entirely with two player BDT. This often depends on the emphasis and time limitations on that day’s practice. It also ensures that players are constantly challenged to think as they cannot memorize any aspect of the drills.

Coach Harvey uses these build up shooting drills to work on specific fundamental skills, and decisions, that happen in their offense. As you can tell by watching the video, the drills become progressively more game-like in the application of game and team specific actions. Adding passing and cutting, penetration reaction, multiple player movements, and allowing the receiver to shoot the catch all involved not just the shooter, but the off the ball players as well in the perception-action coupling process.

Thanks to Len Harvey, and his team for sharing these examples of BDT build up drills.

Interested in more ideas on building BDT concepts into your individual and team practices and workouts? A number of video examples, and how to guides, are available on the membership website. Stimulate your learning today by adding BDT to your coaching toolbox. 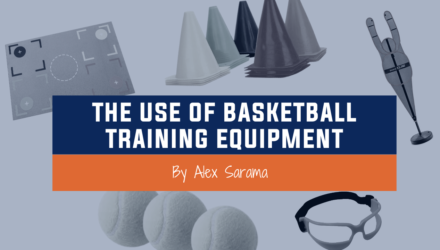 The Use of Basketball Training Equipment

The use of basketball training equipment such as cones, tennis balls and training mats in work-outs and practices is a frequently debated topic. If a continuum were

Finishing moves at the basket are a critical skill

A Theoretical Examination of P...

In a clinic presentation, the